ACCEPTANCE OF AN OFFER

‘Acceptance is a final and unqualified expression of assent to the terms of an offer’. Treitel 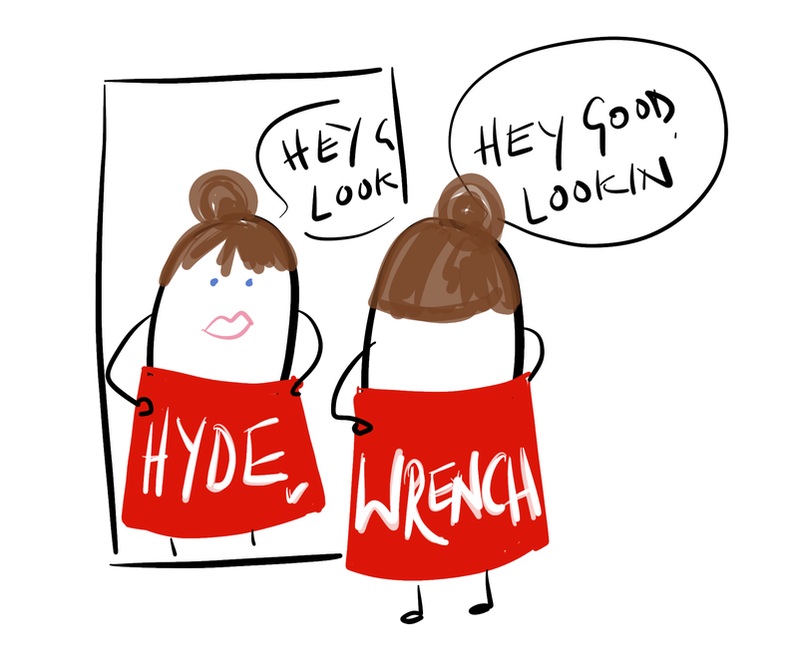 Wrench offered to sell Hyde a farm for £1,000. Hyde offered to pay £950 instead. This was not a ‘mirror image’ of the offer and therefore not a valid acceptance. It was a counter offer and a rejection of the original offer.

Sometimes in commercial contexts there can be confusion as to who the offeror is and who the offeree. In Butler Machine Tool Co Ltd v Ex-Cell-O Corporation Ltd (1979) (CoA) the court ruled that in commercial negotiations the contract will be concluded on the terms of the party which submits their terms last. This is called the ‘last shot’ rule. 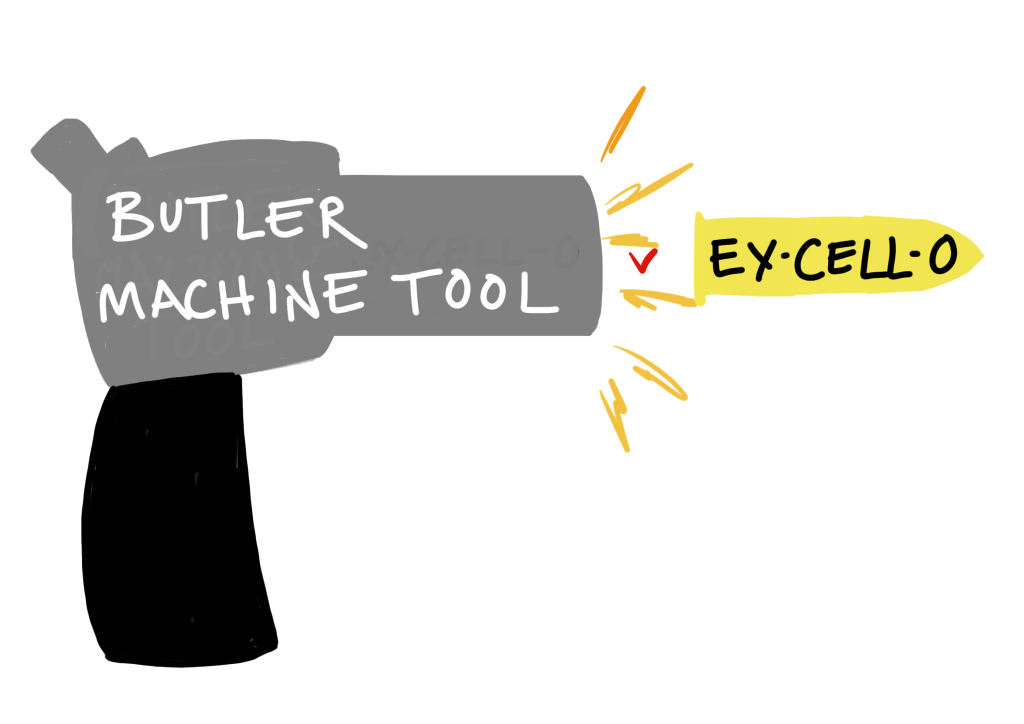 In this case Butler sent Ex-Cell-O an offer, in the form of a quotation, for delivery of a machine tool. Ex-Cell-O replied, accepting the offer, but on different terms (a counter offer – making them the offeror). Butler then signed and returned Ex-Cell-O’s confirmation tear-off slip. The court ruled that the parties had contracted on Ex-Cell-O’s terms because they had fired the ‘last shot’ which Butler had accepted by signing and returning the slip.

In Tekdata Interconnections Ltd v Amphenol Ltd (2009) the court held that the ‘last shot’ rule could be displaced if the contractual documents indicated a common intention to contract on a different set of terms.

Where the terms of the offer are too vague a contract will not be enforced by the court and any acceptance will not be valid. In Scammell v Ouston (1941) (HoL) the phrase ‘on hire purchase terms’ was not defined and was therefore too vague to be enforceable. 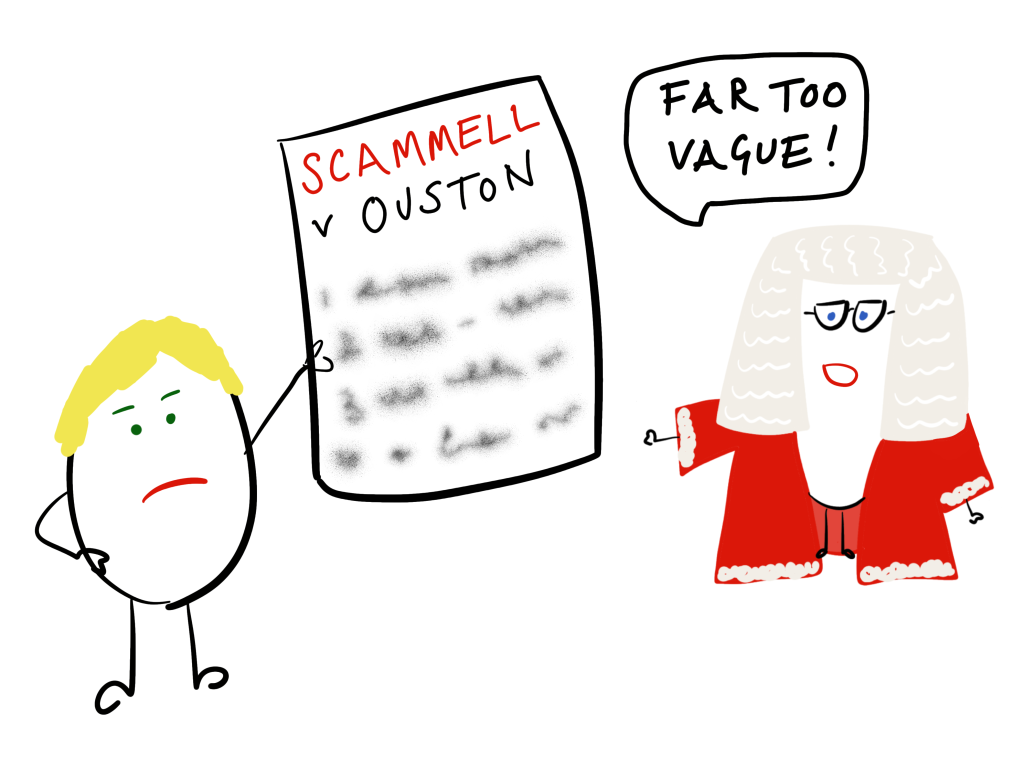 However, there will be occasions where an otherwise vague or ambiguous phrase may be given specific meaning by the courts. To give effect to the intentions of the parties, the court can look to standard commercial practice or the previous dealings of the parties to define any ambiguous term. The courts should interpret words in an agreement in such a way as to preserve, rather than destroy, its subject matter (Hillas v Arcos (1932) (HoL)).

Hillas had purchased timber from Arcos. The agreement contained an option to purchase an extra 100,000 units at a discounted rate with the price to be agreed the following year. Arcos refused to honour this, arguing that the term was too ambiguous to be enforceable, it was simply an agreement to agree a price. However, the court disagreed, the term (to set a discounted rate/ price) was objectively certain enough to be enforceable. The ambiguity as to price was because the price of wood fluctuated over time, it was not enough to destroy the agreement all together.

An objective reference to determine the meaning of any phrase is vital. In Baird Textiles Holdings v Marks & Spencer (2001) (CoA) the meaning of ‘reasonable’ quantity and price could not be determined by the court because they had no objective criteria by which to judge it. The agreement between the parties had never been formally set down and therefore it was not possible to interpret what the parties common intention was based on that term. The phrase was too ambiguous to create a contract.

KNOWLEDGE OF THE OFFER

The offeree must be responding to an offer when they accept. They cannot accidentally accept an offer without knowing it exists (R v Clarke (1927) (HC of Australia)). 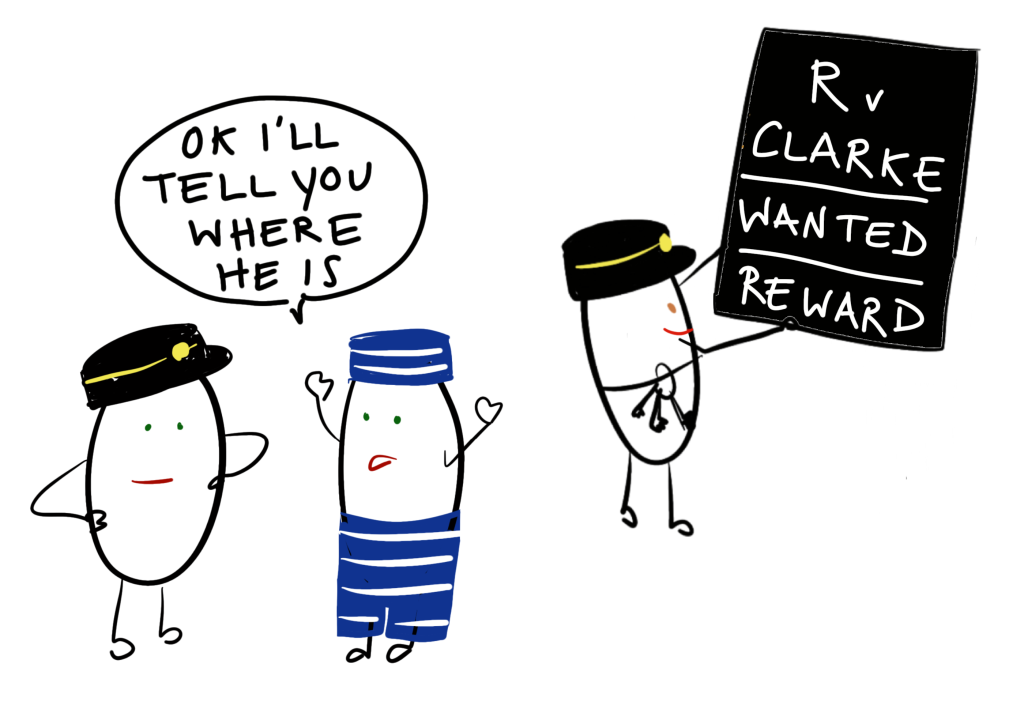 The Australian government offered a reward for information about a crime. Clarke was a prisoner who provided information but had forgotten about the existence of the reward. Therefore he could not accept the offer.

‘There cannot be assent without knowledge of the offer, and ignorance of the offer is the same thing whether it is due to never hearing of it or forgetting it after hearing’, Higgins J

Another example of this is Gibbons v Proctor (1891) (HC). Gibbons, a police officer, gave information about a crime to a colleague. No reward had been offered at this time. The information provided by Gibbons was passed through several colleagues to the Superintendent. By this time the reward had been offered. The offer had specifically asked for information to be given to the Superintendent and Gibbon’s information only fulfilled this request (despite going via others) after he had knowledge of the offer. Therefore court decided that Gibbons had validly accepted the offer and could receive the reward.

The offeree’s motive for accepting is not important as long as they know about the offer (Williams v Cawardine (1833) (HC)). 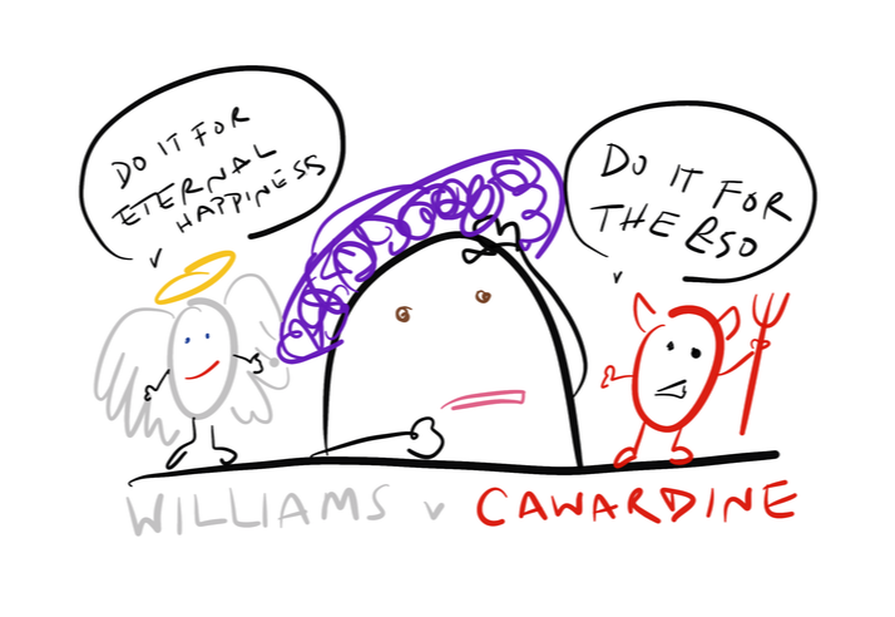 On her deathbed Mrs Cawardine gave the police information about a murder  because she wanted to die without it preying on her mind. When her descendants tried to claim the reward it was refused because the information had not been given specifically with the intention of claiming the reward. The court found that this made no difference and they could claim the reward.

In order to be valid, acceptance must be communicated to the offeror.

If the acceptance is posted then it is valid at the moment it is posted (see Postal Rule below). If the method of communication is instantaneous then acceptance will be valid upon receipt by the offeror (Entores Ltd v Miles Far East Corp (1955) (CoA)). 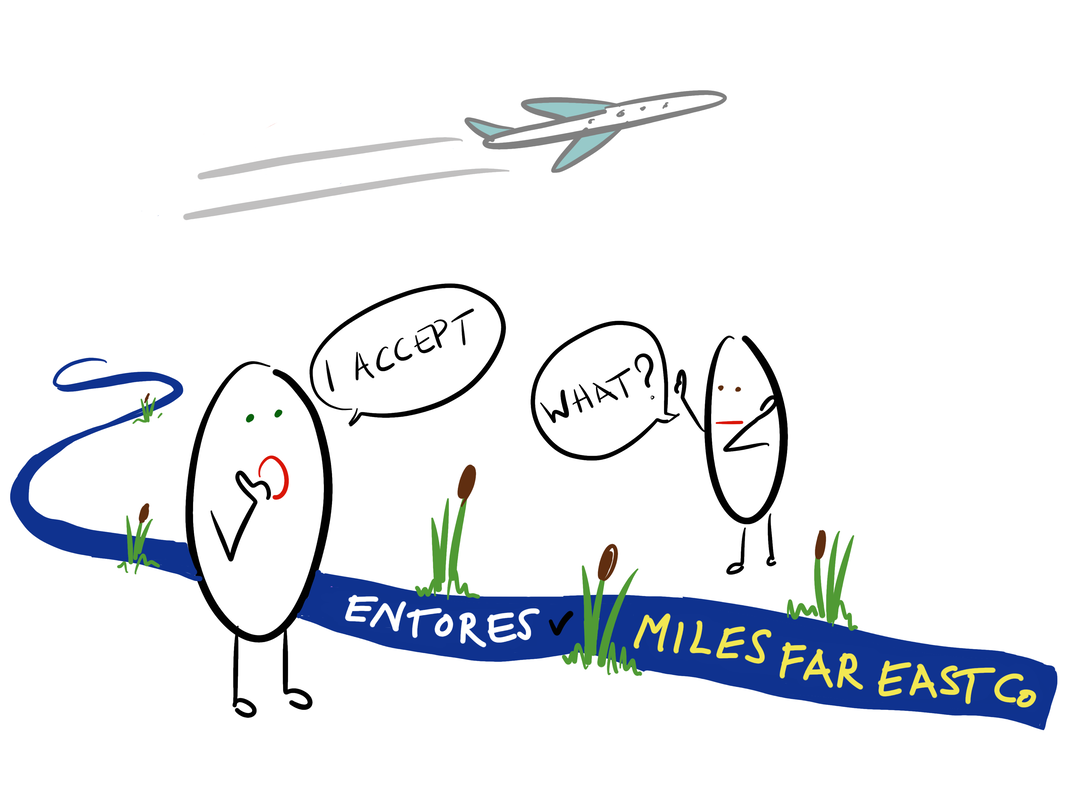 Acceptance was communicated via telex from Holland to England. The court decided that telex was a form of instantaneous communication valid upon receipt (like face-to-face or telephone) and did not follow the Postal Rule which had been applied to telegrams. It was an important decision because it decided in which jurisdiction the contract was completed, England or Holland.

The overriding principle was confirmed in Brinkibon Ltd v Stahag Stahal (1983); acceptance will take effect at the point where the offeror can reasonably expect it to have done so IF they have done everything reasonably possible to ensure that the message has been communicated to the offeror.

The offeree’s silence cannot equal acceptance. Silence is not clear enough a response to lead to a valid acceptance (Felthouse v Bindley (1862) (Court of Common Pleas)). 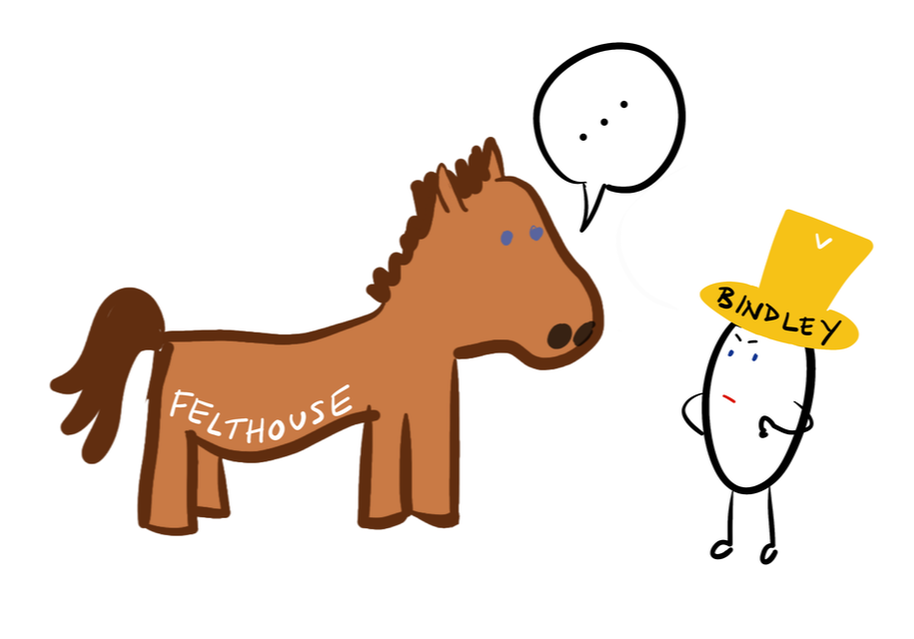 Felthouse offered to buy a horse from his nephew (Bindley). He said that if he heard no more from his nephew then he would consider the horse his. Bindley accidentally sold the horse at auction and the uncle sued for breach of contract. However, the court ruled that Bindley’s silence was not a valid form of acceptance and therefore there had been no valid contract.

In limited circumstances silence can equal acceptance (Rust v Abbey Life Insurance Co (1979)). Rust had instigated negotiations and sent the money for an investment with Abbey Life. She was then sent the policy documents to sign but did not return them for seven months at which point she asked for her money back. The court said that Rust’s silence and previous conduct indicated acceptance even though she hadn’t returned the signed policy.

The conduct of the offeree can indicate acceptance. In a situation where the offeree says nothing but their conduct indicates that they intend to accept then this can equate to a binding acceptance (Brogden v Metropolitan Railway Co (1877) (HoL)). 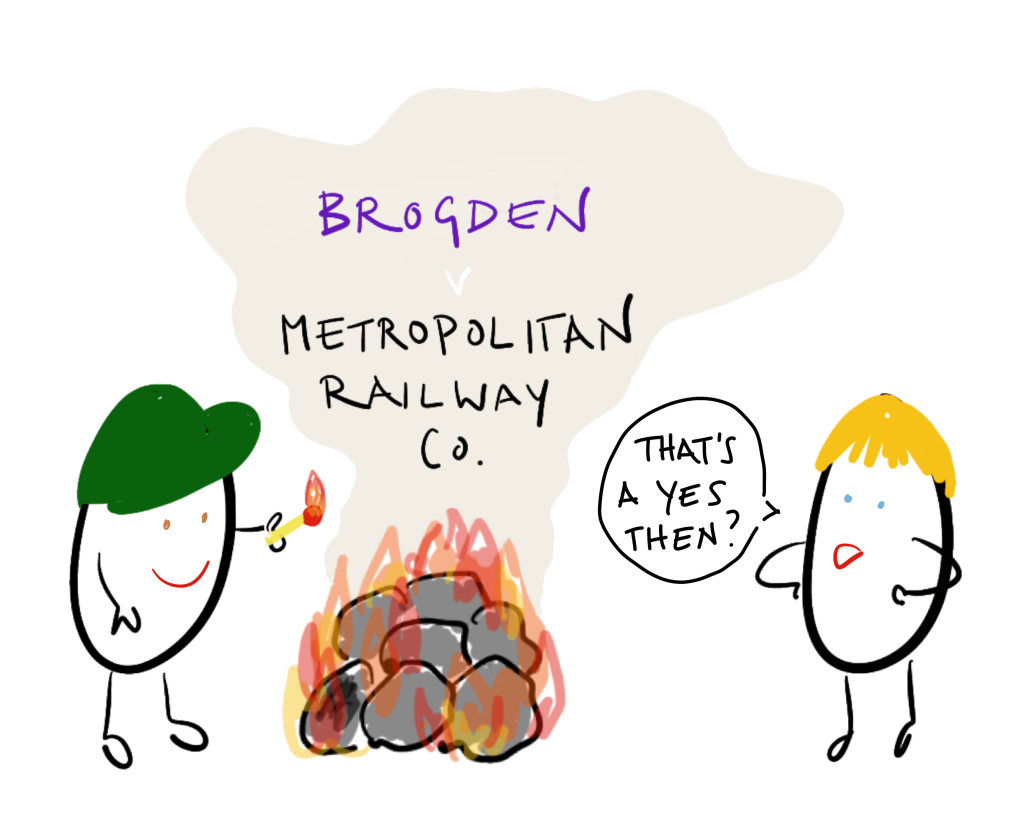 Brogden informally supplied coal to the Metropolitan Railway. The two parties decided to create a formal agreement but it was never properly signed. Despite this, the subsequent conduct of the parties (they continued to send and receive loads of coal) constituted acceptance of the formal agreement.

If the acceptance is sent within normal working hours (circa 9am to 6pm) then it is deemed to have been communicated upon arrival even if it is not read until later (The Brimnes (1975) (CoA)). 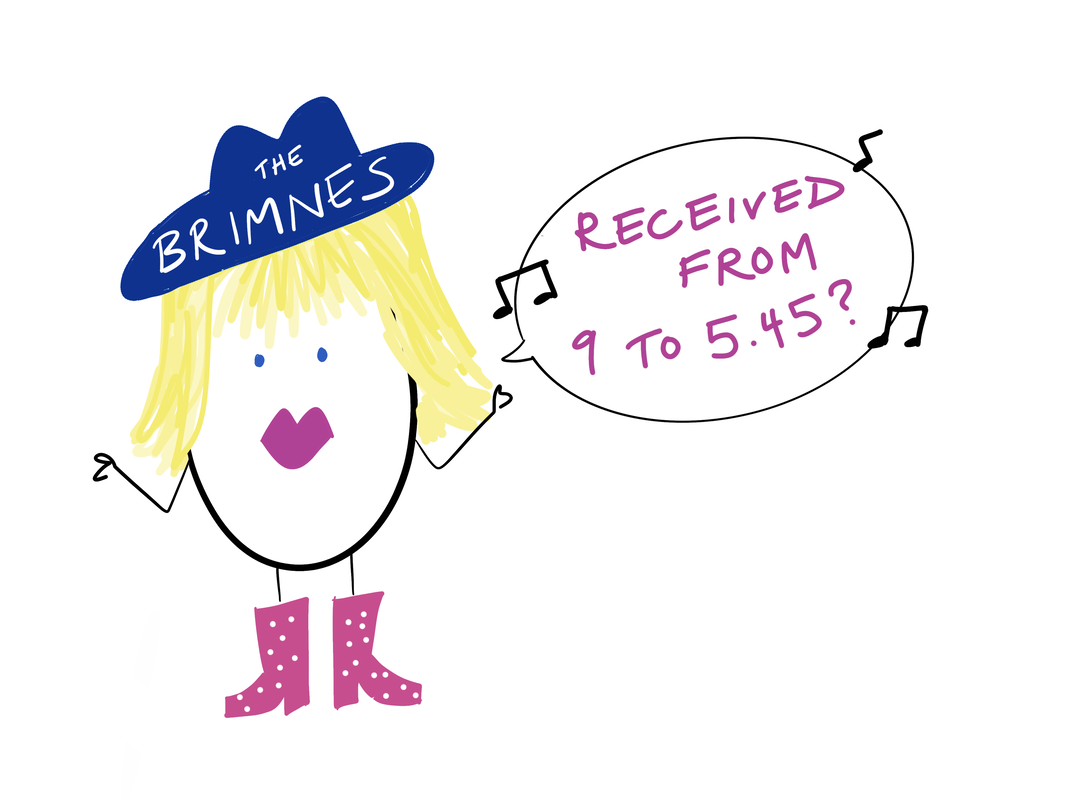 A telex was sent within working hours (at 5.45pm) but not read until the following Monday. It was deemed to have been valid upon arrival, even though it hadn’t been read, because the offeree would have expected it to have been read when it arrived.

Note that in this case it was a revocation that was being sent and not an acceptance but the rule applies to both.

COMMUNICATION OUTSIDE OF WORKING HOURS?

The definition of ‘normal working hours’ has been disputed. In Thomas v BPE Solicitors (2010) (HC)an email sent at 6pm on a Friday was deemed to be within working hours partly because the previous correspondence had discussed the need for the transaction to be completed on that day. It seems that the specific circumstances of the case will be applied to determine whether the acceptance should have been read by the offeror but the law remains uncertain.

Unlike instantaneous methods of communication if the offeree posts their acceptance to the offeror then it is valid at the moment it is posted (Adams v Lindsell (1818) (HC)). This is known as the Postal Rule and it is an exception to the general rule that acceptance is valid upon receipt. 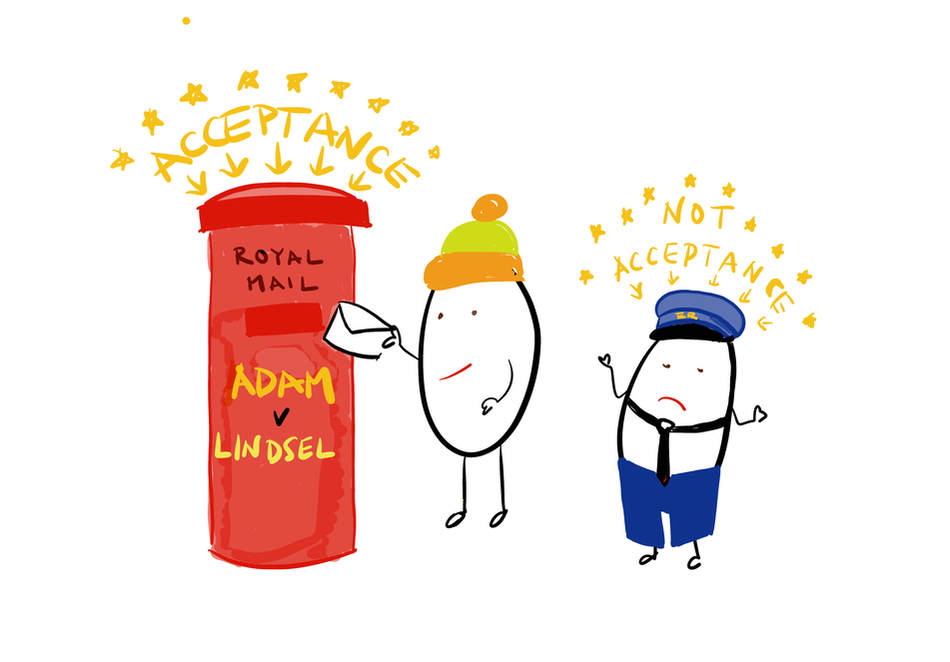 There are four conditions attached to the postal rule:

An acceptance sent by post can be revoked by a faster method of communication (Countess of Dunmore v Alexander (1830)). However, this was only expressed in an obiter dicta in a Scottish case and has never been followed since.

Acceptance of a unilateral contract is the completion of the specified act by the offeree (Daulia v Four Millbank Nominees (1978) (CoA)). There is no obligation to communicate acceptance before beginning the act.