Damages is the payment of money to compensate the innocent party for any loss suffered as a result of the breach. Damages are not designed to be a punishment for the defendant which means that where the claimant suffers no loss they will only be awarded nominal damages.

The aim of damages is to compensate the innocent party and place them in the position they would have been in had the contract been performed (Robinson v Harman (1848) (Court of Exchequer)). 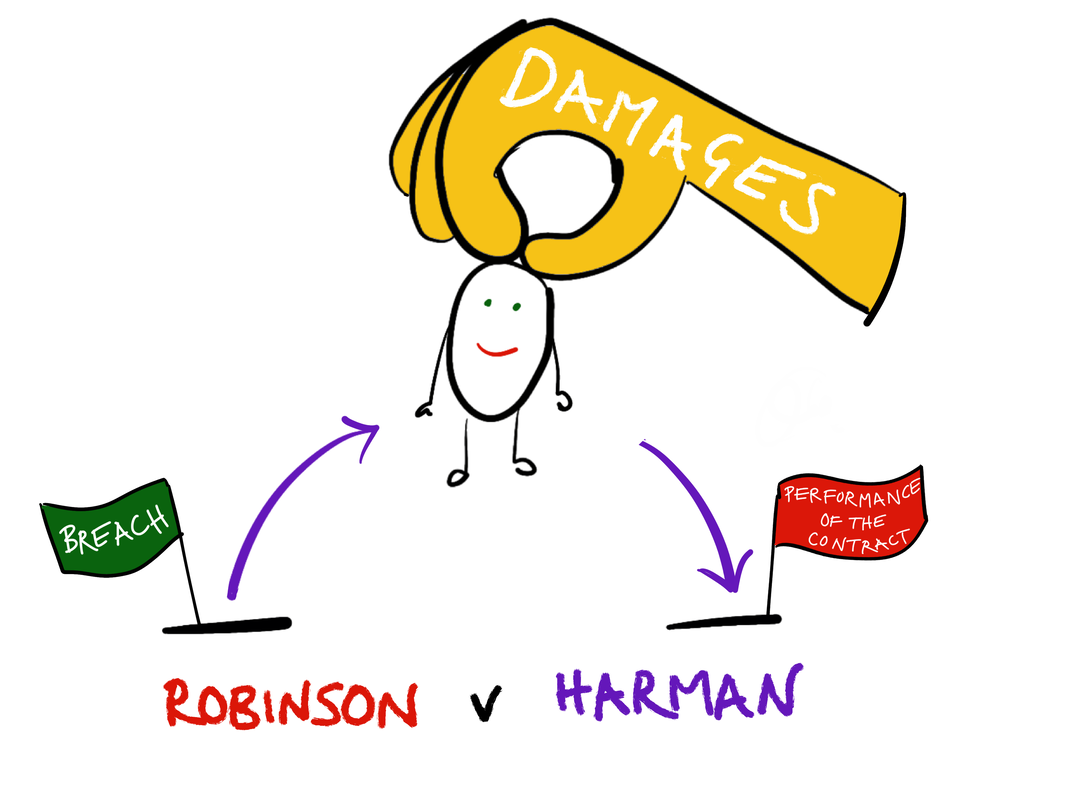 ‘…where a party sustains a loss by reason of a breach of contract, he is, so far as money can do it, to be placed in the same situation, with respect to damages, as if the contract had been performed.’ Parke B, Robinson v Harman

There are several different mechanisms that the courts can use to calculate damages.

The expectation loss is a calculation of damages based on what the innocent party expected to gain from the contract but lost because of the breach. This can be the difference in value, cost of cure or loss of opportunity.

This is the most often used method for calculating damages. The court simply considers the difference in the market value between what the claimant contracted to receive and what they actually ended up receiving.

The court can also award the cost of cure. This is an award of damages that covers the cost of remedying the defect or obtaining substitute performance. The court will only award this if it is reasonable to do so and the claimant actually intends to remedy the defect (Ruxley Electronics & Construction v Forsyth (1995) (HoL)). 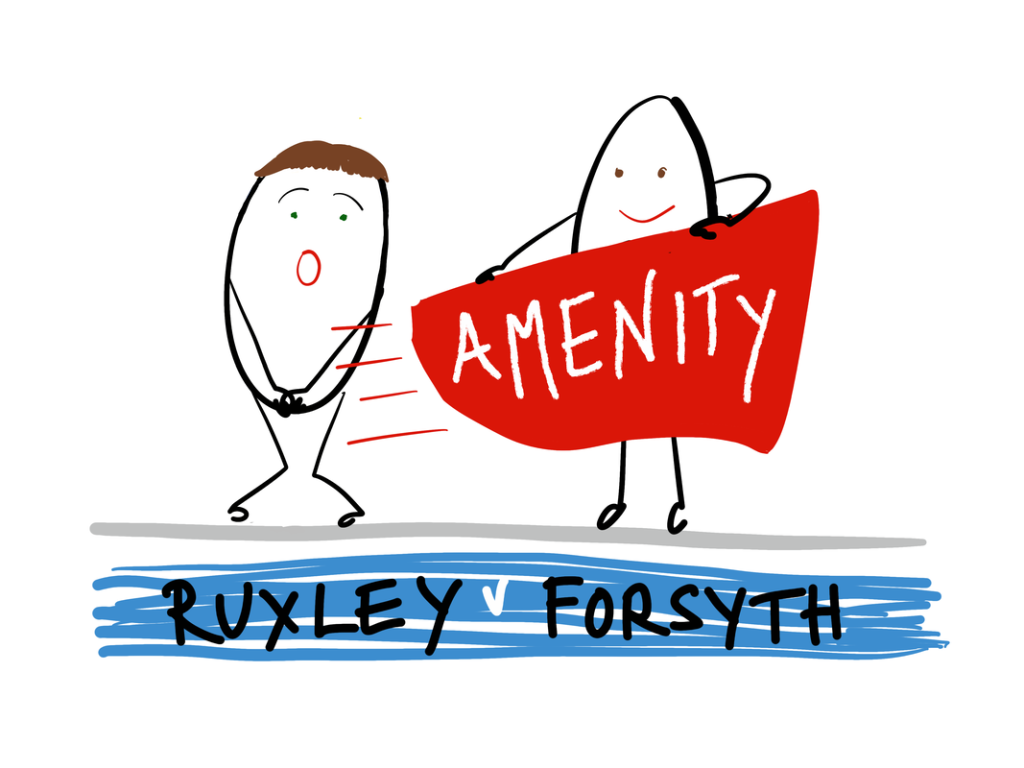 Forsyth contracted with Ruxley to build a swimming pool in his garden. The pool was significantly shallower than what had been ordered so Forsyth sought damages for breach of contract. However, the pool was sufficiently deep to swim and dive safely into, which meant the difference in value was £0 but the cost of cure (i.e. to remove and rebuild the pool) was over £21,000. The court felt that it was unreasonable to award the cost of cure as the amount was out of proportion to the loss suffered by Forsyth but that Forsyth should receive £2,500 for loss of amenity.

It is not always possible to know exactly what the loss caused by a breach of contract would have been, losses may be speculative. In these circumstances, if it is reasonably possible to calculate damages, the courts can award for loss of opportunity (Chaplin v Hicks (1911) (CoA)). 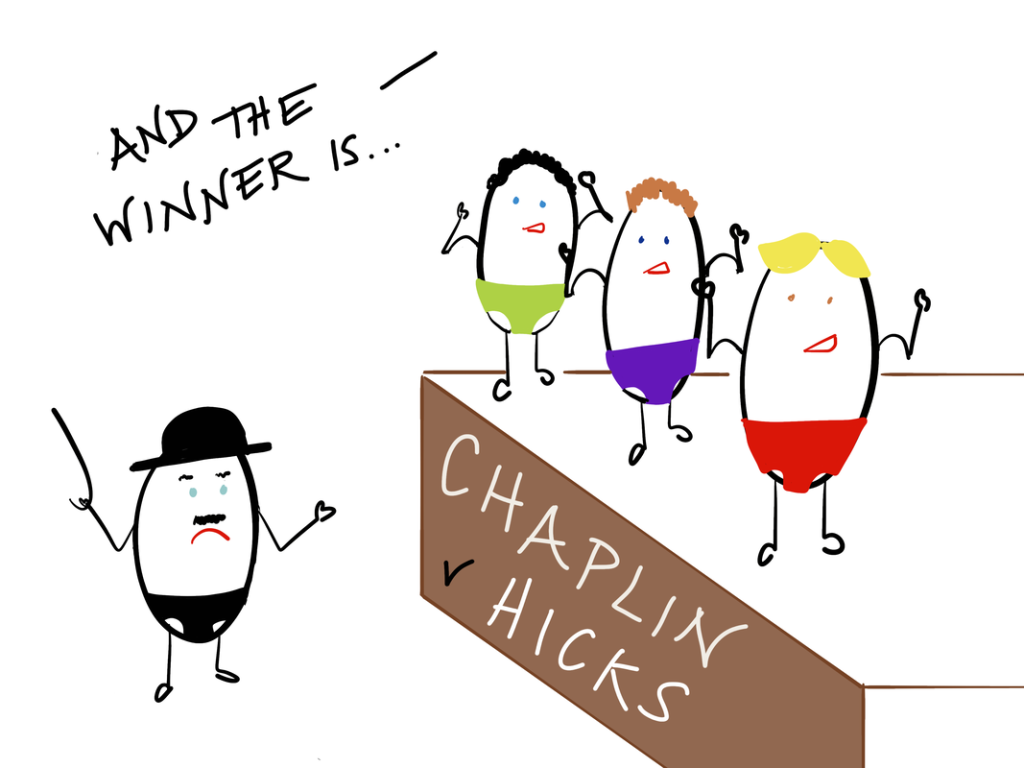 Hicks, a well-known actor, advertised a beauty contest. The winners were to be given acting work. Chaplin entered and made it through to the last round but the letter instructing her where and when to attend never arrived. The court awarded her damages of £100 for the loss of opportunity even though it was speculative whether she would have won anything had she been given the correct information and the opportunity to attend the final.

Just because the loss is speculative does not mean that the courts will not award damages on an expectation basis. ‘The fact that damages cannot be assessed with certainty does not relieve the wrongdoer of the necessity of paying damages for his breach of contract’, Vaughan Williams LJ, Chaplin v Hicks

Non-pecuniary loss covers any loss that is not financial. Traditionally only damages for physical, rather than mental, distress were awarded by the courts (Addis v Gramophone Co Ltd (1909) (HoL)). 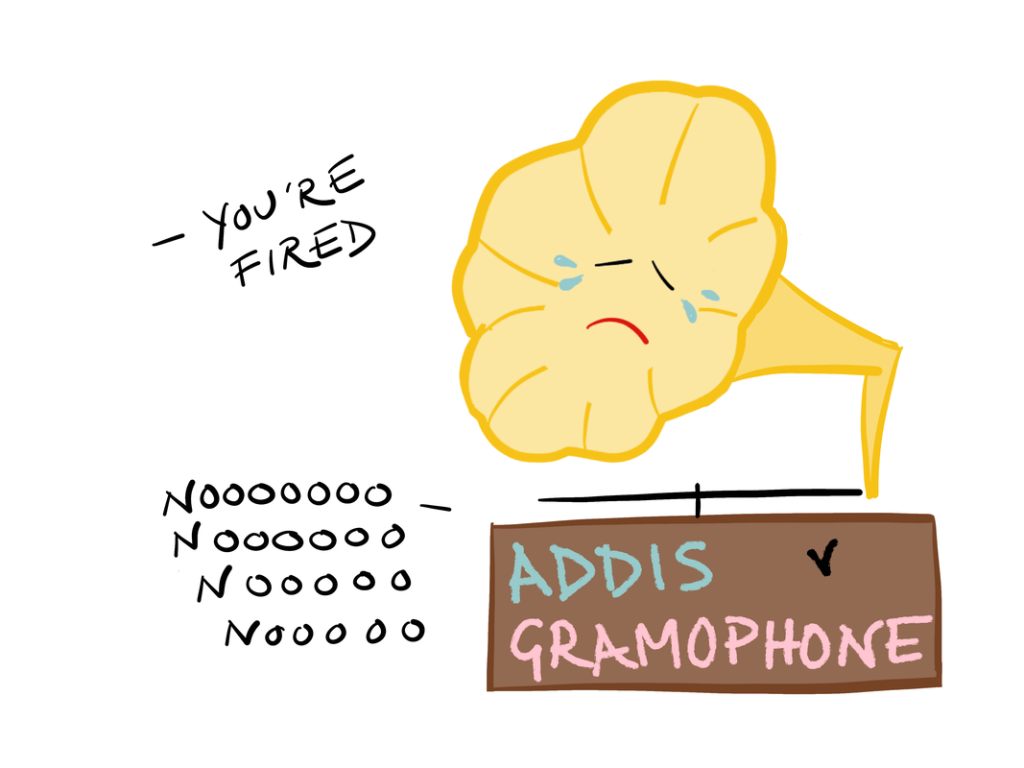 Mr Addis had been fired from his job in what he claimed was a ‘harsh’ and ‘humiliating’ fashion causing him distress and damage to his reputation. The House of Lords refused to make an award for damages on the basis of mental distress and instead ruled that damages were limited to his lost wages and any loss of commission.

RECOVERY FOR DISTRESS OR DISAPPOINTMENT

However, since then the courts have created certain exceptions to this rule. Where the object of the contract was to provide pleasure, relaxation, peace of mind or freedom from molestation and the breach prevented this from happening then damages can be awarded for distress or disappointment. The case of Jarvis v Swans Tours (1973) (CoA) serves as a prime example. 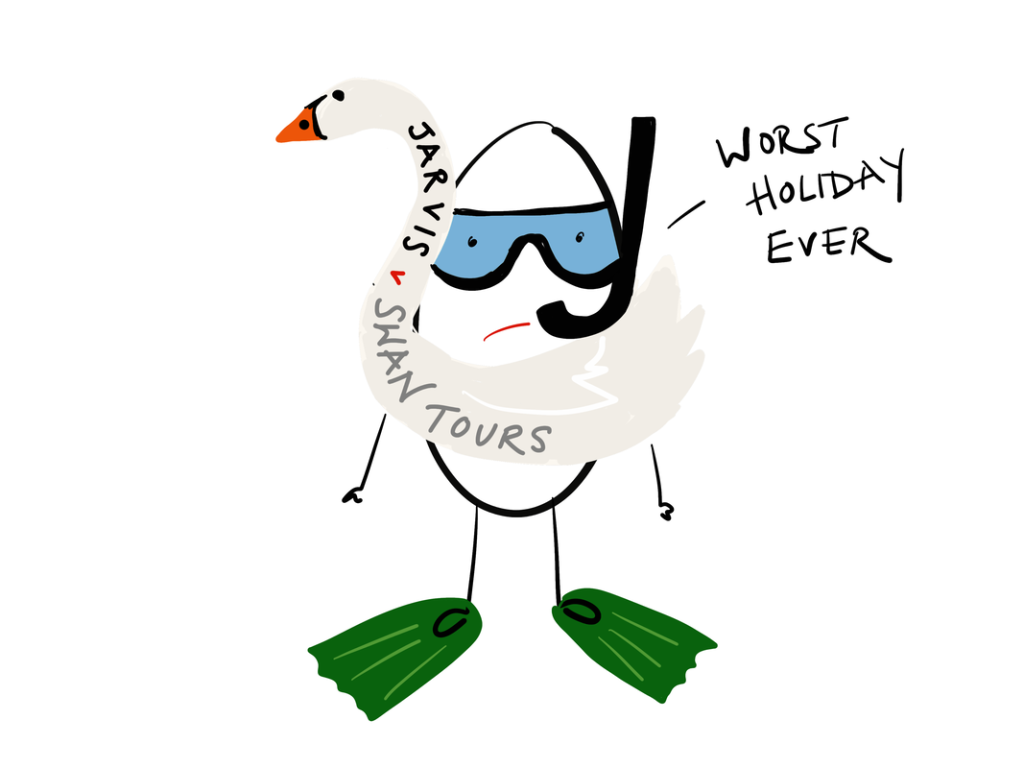 Jarvis booked a ‘houseparty holiday’ in a ski resort. There were numerous problems with the vacation and it did not live up to the description advertised in the holiday brochure. At the first instance Jarvis was awarded half of what he paid for the holiday on the basis that he had only received half of the facilities promised. He appealed and was awarded a larger sum for the lack of facilities and ‘the loss of entertainment and enjoyment which he was promised’.

Other examples include Diesen v Samson (1971) (Sheriff Court) in which a wedding photographer who failed to turn up to a client’s wedding had to pay damages for the bride’s distress at not having any professional wedding photos. In Heywood v Wellers (1976) (CoA) a firm of solicitors who were hired to bring proceedings to restrain a man who had been molesting the claimant failed to do so, leading to the continuation of the molestation. The claimant was able to sue for mental distress and upset.

Pleasure does not have to be the sole purpose of the contract (Farley v Skinner (2001) (HoL)). 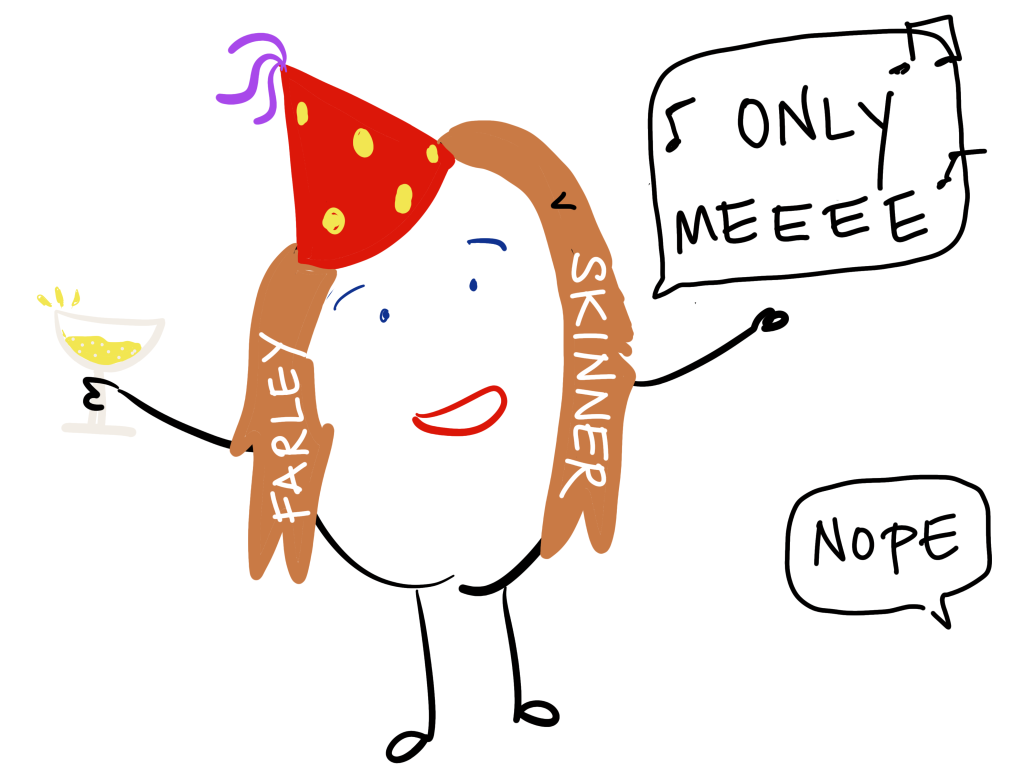 Skinner had been employed to survey a house, that Farley wanted to buy, with specific instructions to survey the noise caused by planes coming in and out of Gatwick which was 15 miles away. Skinner’s report stated that ‘we…think it unlikely that the property will suffer greatly from such noise’. In fact the noise from the aircraft was severe and especially affected Farley’s enjoyment of the house’s generous outdoor space. Although the sole purpose of the survey was not enjoyment the House of Lords clarified that it is sufficient that it constitutes a ‘major or important’ element.

Farley was awarded £10,000. This was not challenged by the House of Lords but the size of the award was remarked upon and the court stated that this should be considered at the upper limit of awards for this type of loss, as per Lord Steyn ‘awards in this area should be restrained and modest’.

If there has been no financial loss by the claimant and cost of cure would not be appropriate the courts have also made awards for loss of amenity, also called consumer surplus (Ruxley Electronics & Construction v Forsyth (1995) (HoL)). 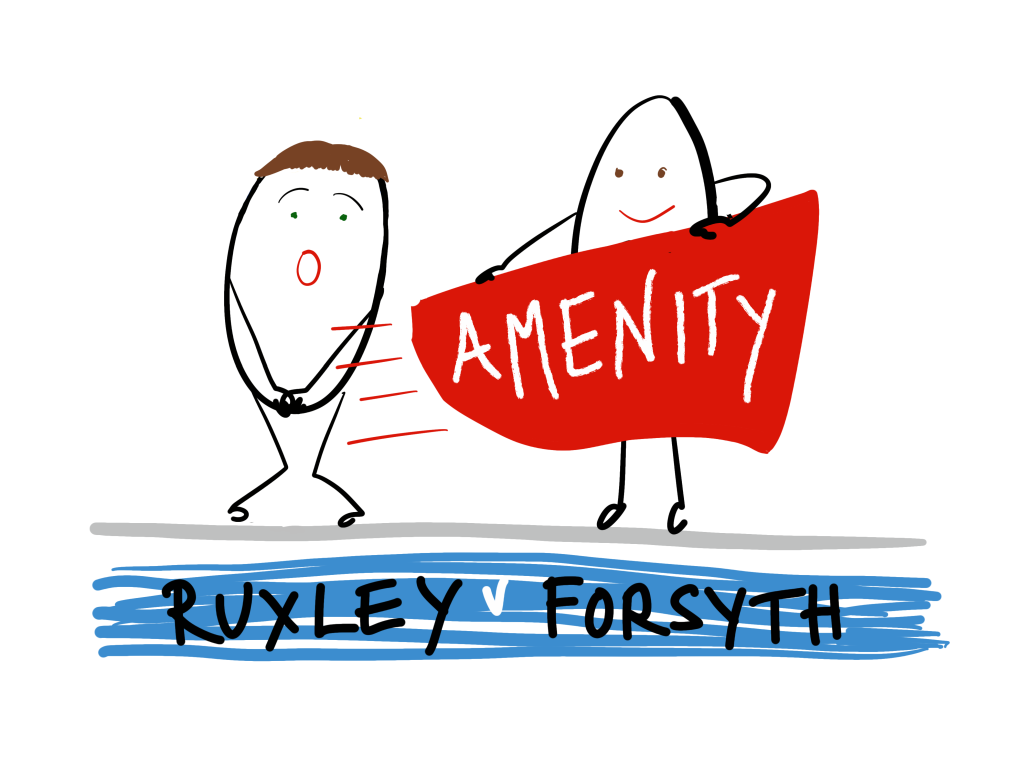 Forsyth contracted with Ruxley to build a swimming pool in his garden. The pool was significantly shallower than what had been ordered so Forsyth sought damages for breach of contract. However, the pool was sufficiently deep to swim and dive safely into, which meant the difference in value was £0 but the cost of cure (i.e. to remove and rebuild the pool) was over £21,000. The court felt that it was unreasonable to award the cost of cure as the amount was out of proportion to the loss suffered by Forsyth but that Forsyth should receive £2,500 for loss of amenity.

If claims are too speculative the court will assess damages on a reliance loss basis (also known as wasted expenditure) rather than an expectation loss basis. This covers the expenses that the innocent party has incurred in reliance on the contract. In contrast to most awards for damages the aim is to put the innocent party back in the position that they were in before the contract began rather than to the position they would have been in had the contract been performed. A good illustration of reliance loss is Anglia Television v Reed (1972) (CoA). 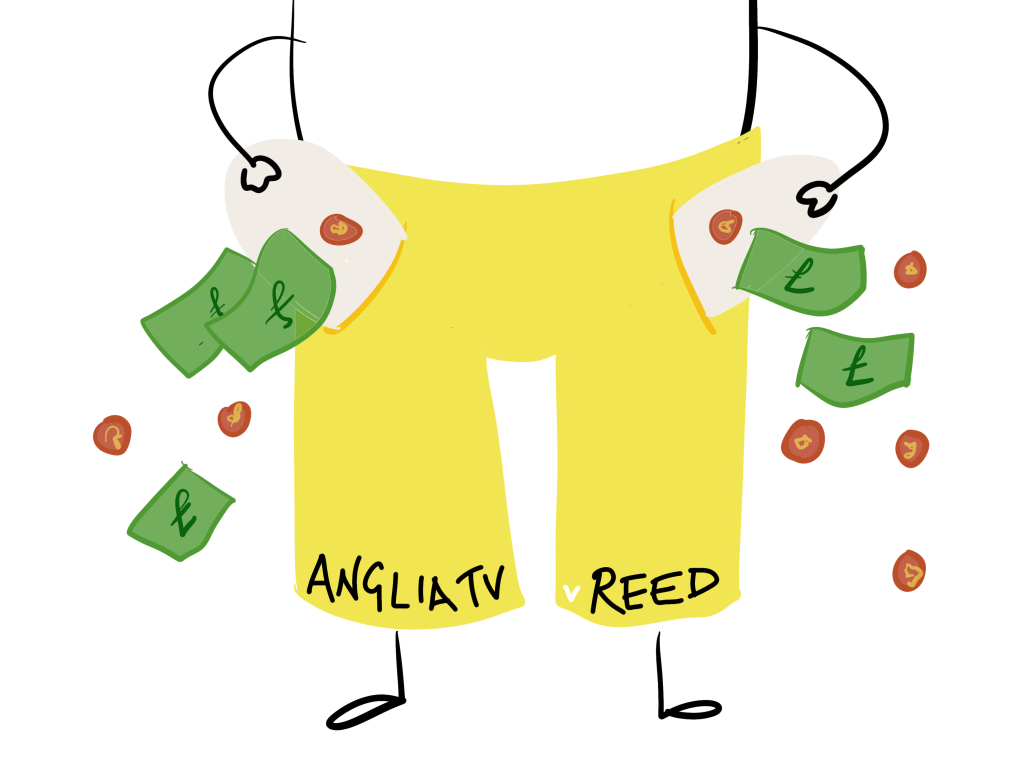 Anglia TV entered into a contract with Reed, an actor, to play a leading role in a televised play. However, when Reed pulled out from the contract and Anglia TV was unable to find a replacement they had to abandon the play altogether. As they did not know what, if any, profit their film would make, they could not claim damages on an expectation basis but they were able to claim the expenses that they had incurred for the work that had been done on a reliance loss basis.