Before damages will be awarded there are certain hurdles that must be cleared. These restrictions apply only to pecuniary losses. 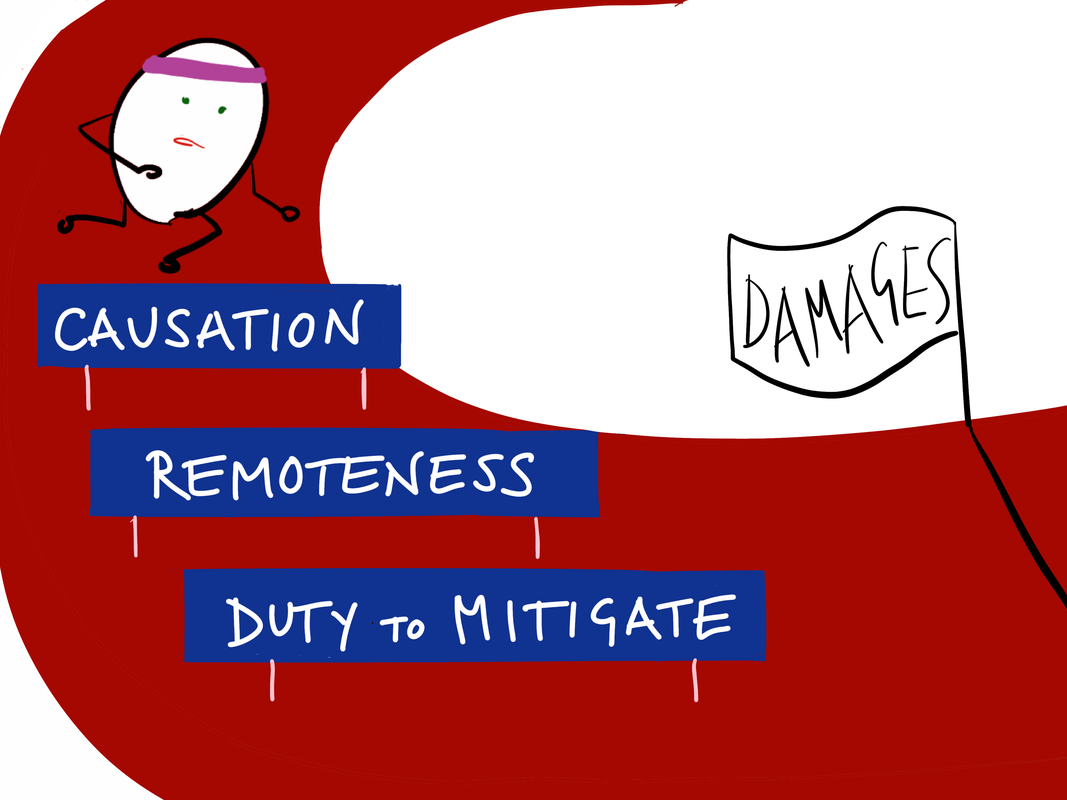 In order for damages to be awarded for loss it must be shown that the breach caused the loss, ‘but for’ the breach the loss would not have happened.

Where the claimant has contributed to the loss through their own negligence this may reduce the damages recoverable under Section 1 of the Law Reform (Contributory Negligence) Act 1945. In Forsikringsaktieselskapet Vesta v Butcher (1986) (HoL) the court said that a ruling of contributory negligence could be given where the defendant has concurrent liability in contract and tort law. In other words, the liability of the defendant must exist independently to the contract (in tort law) for the claimant to have contributed to it by their own negligence.

Before an innocent party is awarded damages it must be proven that the loss which has been suffered is not too remote a consequence of the breach (Hadley v Baxendale (1854) (Court of Exchequer)). 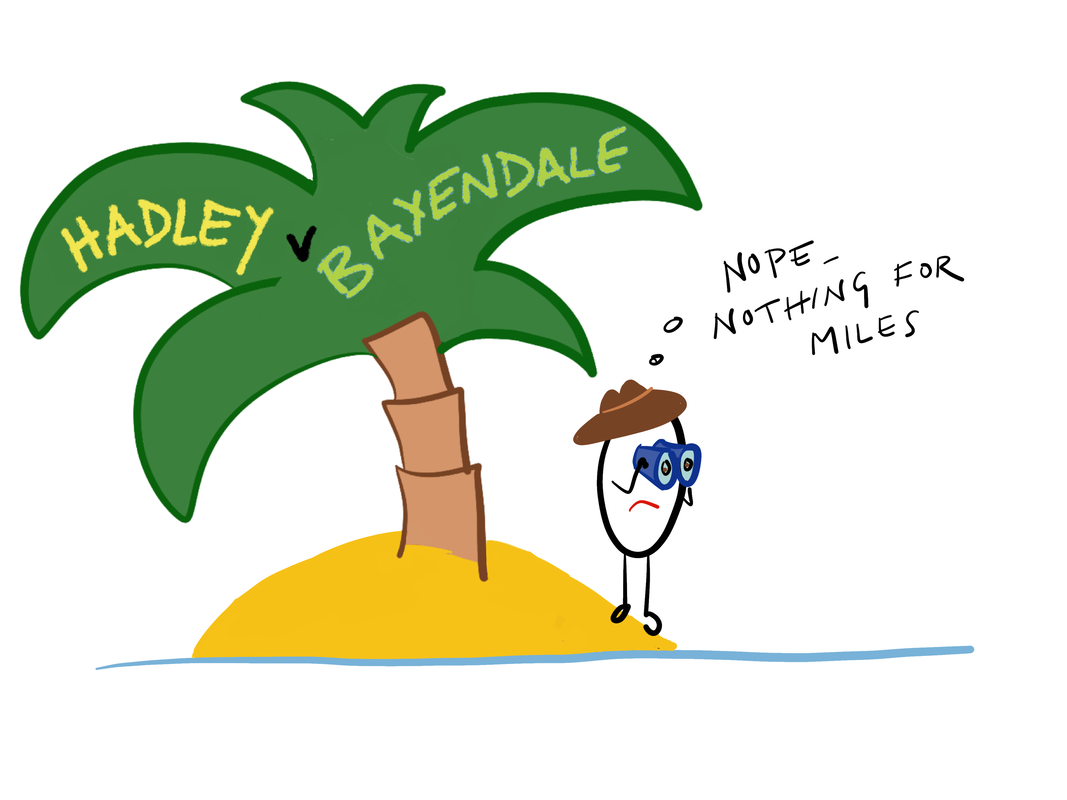 Hadley hired Baxendale to transport a broken mill shaft for repair. The shaft was returned seven days later than expected. Due to the delay Hadley’s mill could not function and he suffered a loss of profit. He sued Baxendale for this but the court found that the loss was too remote to be recoverable. It was reasonable for Baxendale to have assumed that the mill owned a spare shaft and he had not specifically been told that the mill could not function without it.

Two principles were established on the issue of remoteness of damage…

The two principles can be seen as relating to levels of knowledge held by the reasonable man. The first is the ‘usual’ consequences, what any person would have known would happen, and the second is based on the specific knowledge of the parties. 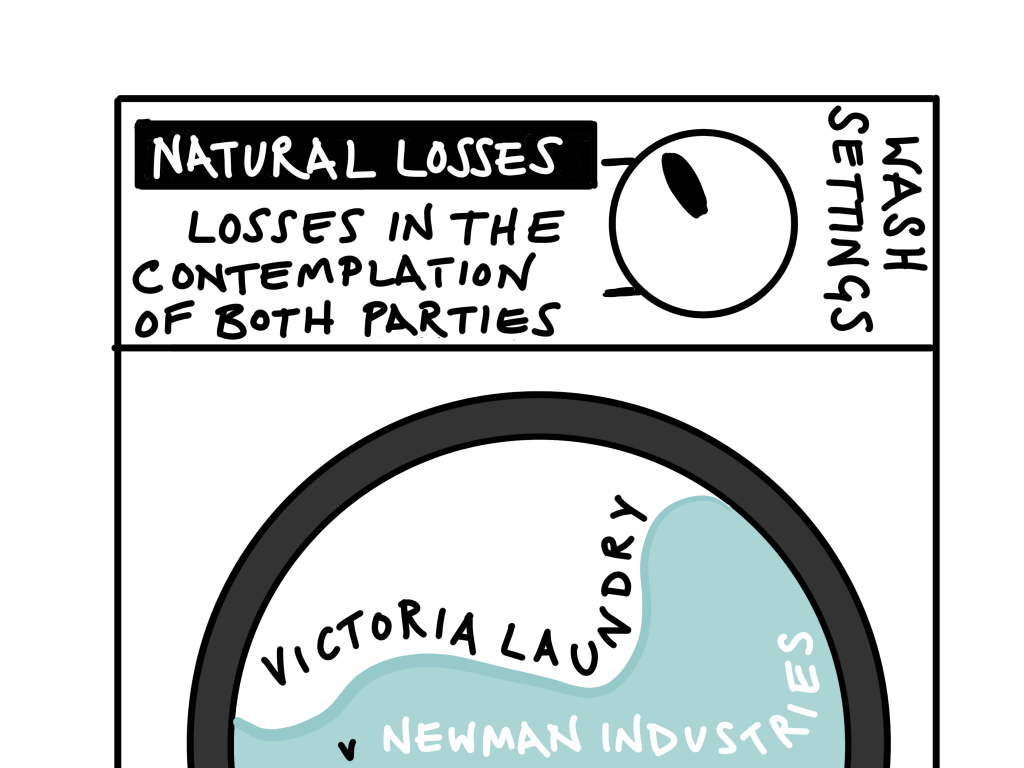 Victoria Laundry purchased an industrial boiler for their laundry business from Newman and a delivery date was expressly stipulated in the contract. However, delivery was delayed by five months so Victoria Laundry claimed damages for both the loss of general profit during the period the boiler was delayed and the loss of a specific contract with the government.

The court held that the claimants could recover the loss of ordinary profits as it would have been reasonably foreseeable that the delay in delivery would lead to this loss, especially as the defendants were a specialist business who knew about the sector and knew that the boiler was needed for immediate use. However, the claimant could not recover the loss of the contract with the government as the defendant had no specific knowledge of this.

Although subsequent courts have debated what the test for remoteness should be (see Transfield Shipping v Mercator Shipping, The Achilleas (2008) (HoL)) the conventional test seems to still be that of reasonable contemplation from Hadley v Baxendale: i.e. was the loss suffered within the reasonable contemplation of the defendant at the time of contracting?

Where there’s a claim for financial loss the claimant is under a duty to mitigate the loss. The claimant will not be entitled to damages for any loss which they did not take reasonable steps to mitigate, or attempt to mitigate. In addition if the outcome of the mitigation is a recovery of all financial loss caused by the breach there can only be an award of nominal damages because there has been no loss (British Westinghouse Electric & Manufacturing Co Ltd v Underground Electric Railways Co of London Ltd (1912) (HoL)). 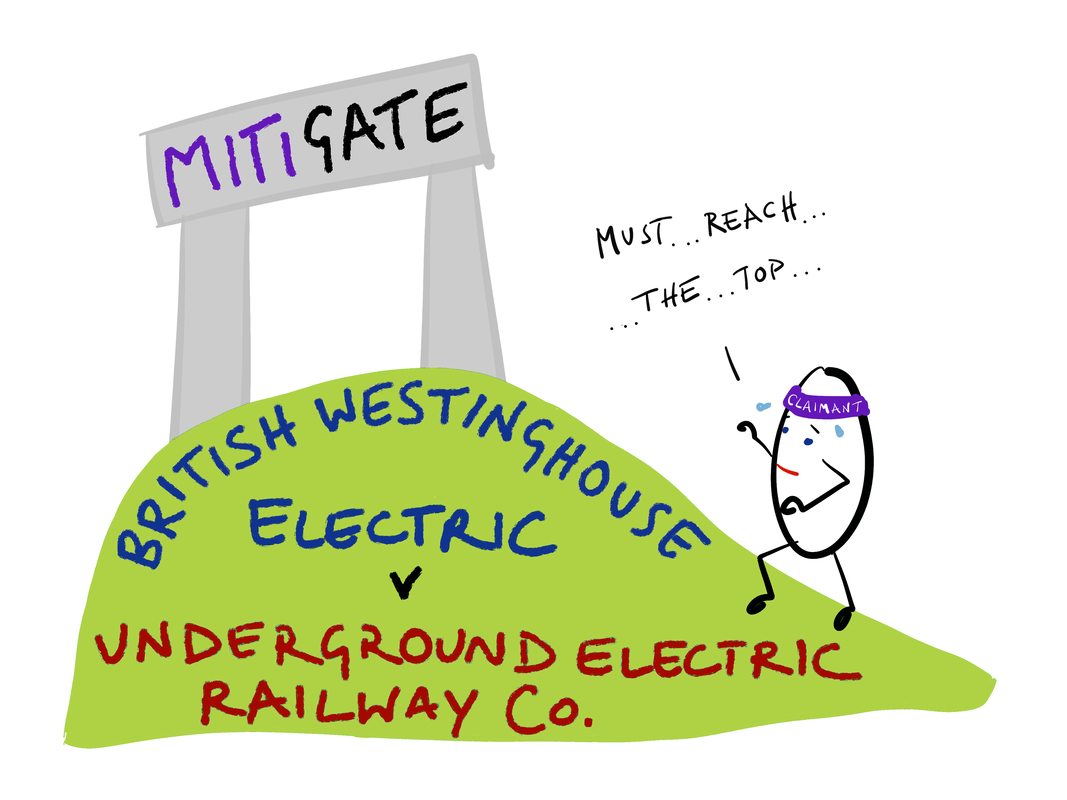 What is reasonable will depend on the facts of the case. For example, if accepting the other party’s breach of contract presents the best means of mitigation then it would be unreasonable not to accept (Payzu v Saunders (1919) (CoA)). 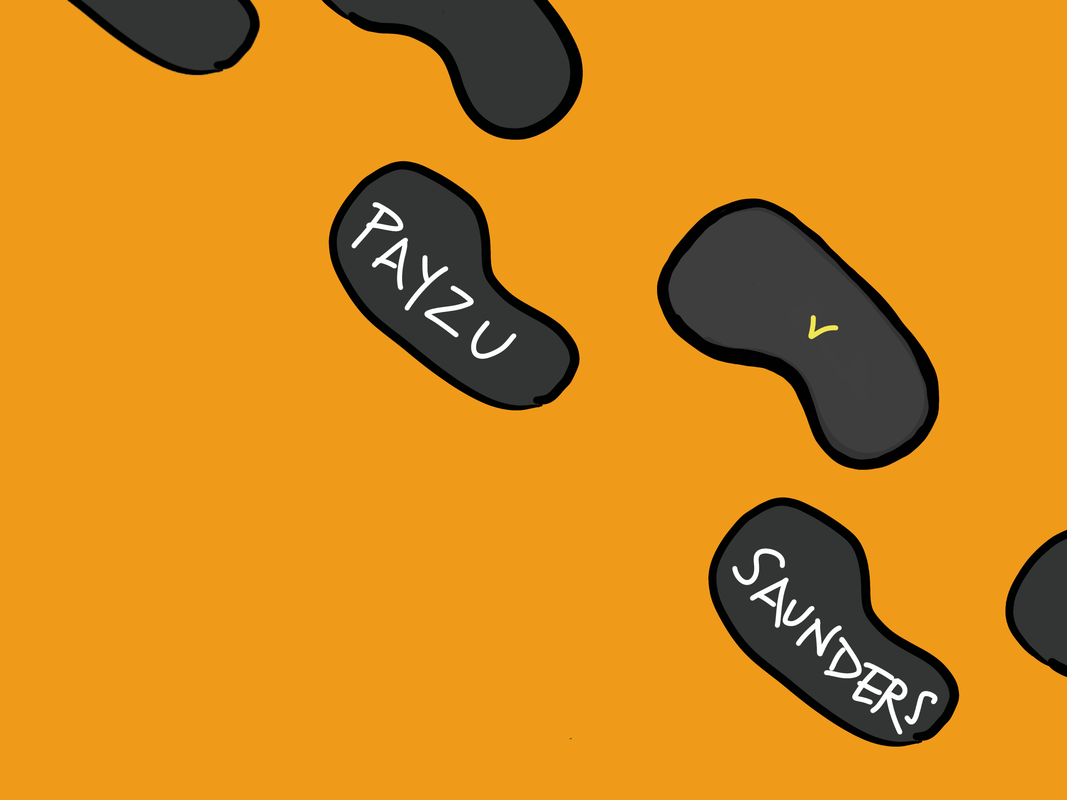 Payzu contracted with Saunders for a delivery every month, for nine months, of crepe de chine at a discounted rate. Payzu’s cheque for the initial delivery was delayed and Saunders claimed, incorrectly, that this terminated the contract. Despite this Saunders offered to continue delivery if Payzu paid in cash upon delivery. Payzu rejected this and bought the product elsewhere for more and then tried to claim the difference in price. The court held that reasonable mitigation would have been accepting the new offer even though it was based on a breach of the original contract.

Other examples include, embarking on expensive and complicated litigation was not reasonable in Pilkington v Wood (1953) (HC). It was reasonable that the claimant had not bought a substitute product in mitigation because he was financially unable to do so in Wroth v Tyler (1974) (HC).

Where the claimant does take reasonable steps to mitigate but this incurs expenses or increases the loss they will be entitled to reimbursement for this extra loss (Banco de Portugal v Waterlow (1932) (HoL)). 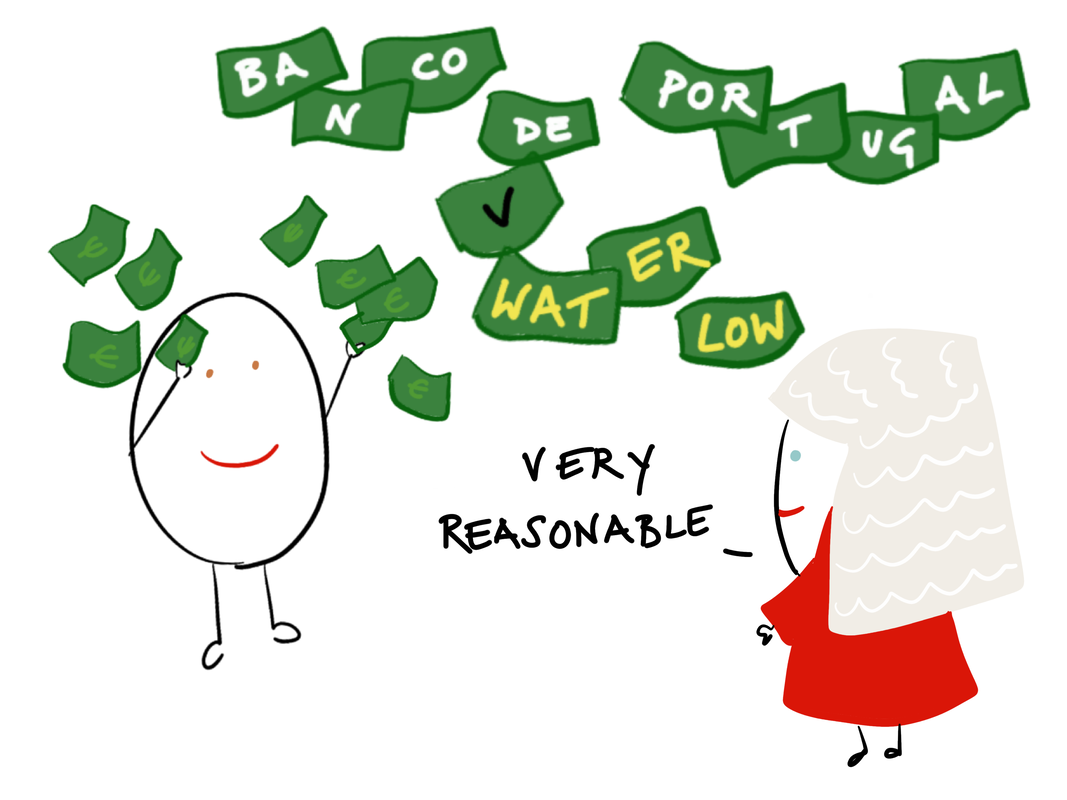 Due to a breach by Waterlow many counterfeit banknotes made it into the Portuguese monetary system. The Banco chose to honour the full value of these notes so as not to create a crisis of confidence in the paper money system. This greatly increased the loss incurred. The court deemed this to be a reasonable step to mitigate and Waterlow was liable for the full amount.

The general rule is that damages are assessed by reference to the time of the breach which is generally when performance was due. This means that if the breach of contract caused loss of £400 worth of goods at the time, but the cost of said goods is now £600, the defendant is only liable for the cost of the goods at the time, and not the extra £200.

However, in Golden Strait Corporation v Nippon Yusen Kubishika Kaisha (The Golden Victory) (2007) (HoL), the House of Lords ruled that the most important principle was that damages should reflect the loss suffered. If assessing damages at the time of breach does not achieve this position it should be disapplied even if this involves taking into consideration events that happened after the breach. 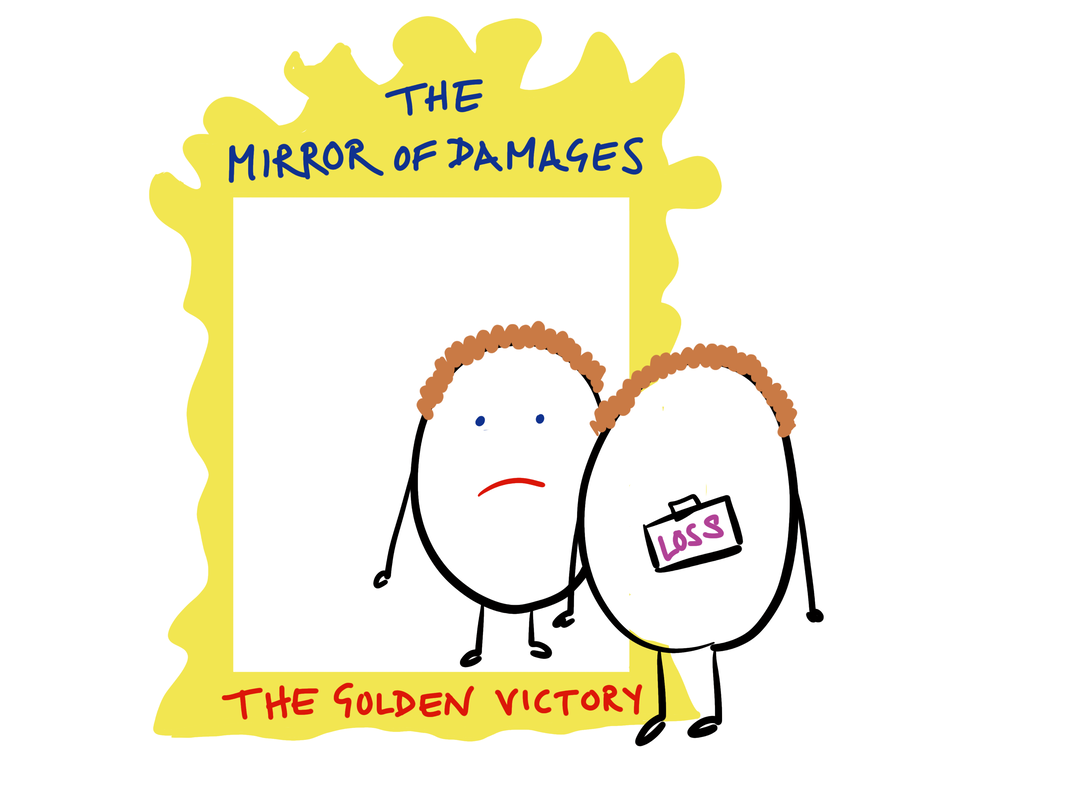 In The Golden Victory the defendant terminated the contract and the claimant sued for damages. After this the Gulf War broke out, which would have activated an automatic right to terminate the contract if it had not been terminated already. The defendants argued that damages should cover the time from termination to the outbreak of war (a number of months) rather than from termination to the intended end of the contract (a number of years). The court agreed and awarded damages that reflected the loss of a few months ship hire rather than a few years.

Sometimes parties will include a liquidated damages clause into their agreement, this is a provision that sets a pre-estimate of damages recoverable from a particular breach. However, if the clause is in fact a penalty clause it will be unenforceable.

The classic distinction between a liquidated damages clause and a penalty clause was set out in Dunlop Pneumatic Tyre v New Garage and Motor (1915). A liquidated damages clause is a genuine pre-estimate of loss whereas a penalty clause ‘is extravagant and unconscionable in amount in comparison with the greatest loss that could conceivably be proved to have followed from the breach’.

The law was considered more recently in the join appeals of Cavendish Square Holding v Makdessi (2015) (SC) and ParkingEye v Beavis (2015) (SC). The Supreme Court held that the law that a penalty clause was unenforceable still stood but they updated the definition of what could be considered a penalty clause.

‘The true test is whether the impugned provision is a secondary obligation which imposes a detriment on the contract breaker out of all proportion to any legitimate interest of the innocent party in the enforcement of the primary obligation’.

In other words, rather than asking whether the sum is a genuine pre-estimate of loss the court must ask if the sum is penal and is out of proportion to any commercial interest, taking into account the commercial context and standing of the parties. This test gives wider scope for what can be considered a liquidated damages clause, especially in a commercial context. 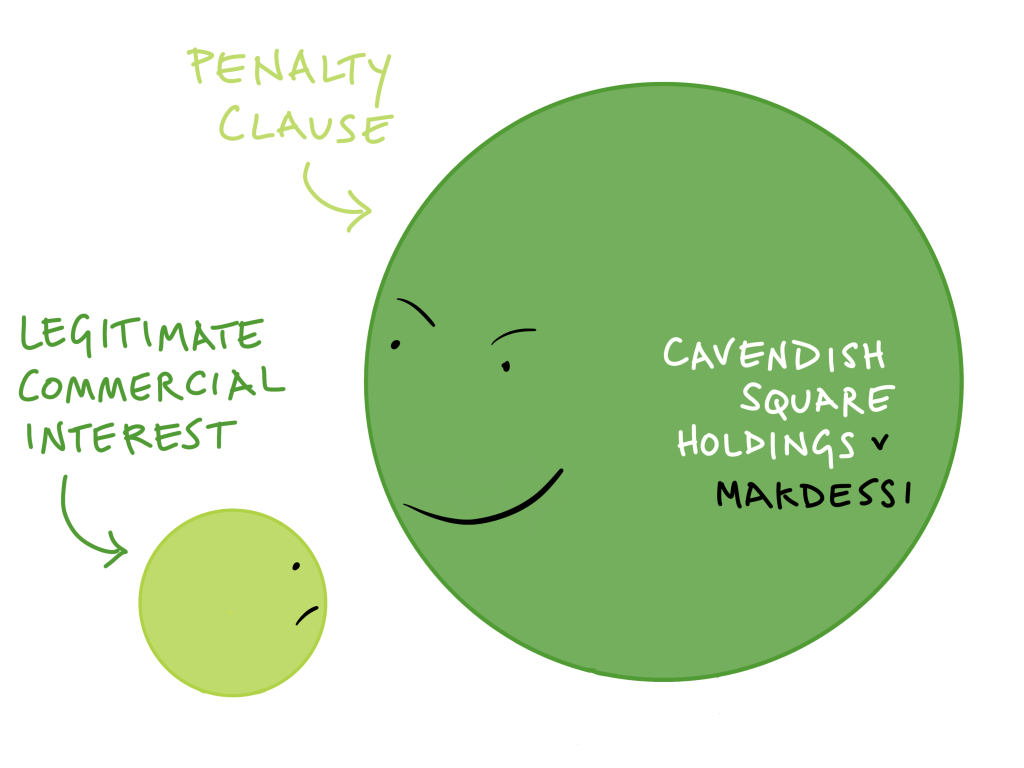