Exemption clauses can often have serious consequences for the party subject to the exemption. In order to avoid parties agreeing to exclude liability without being aware of what they are giving up measures have been put in place by the courts and Parliament to restrict the use and effectiveness of exemption clauses.

Clauses can be incorporated in the following ways… 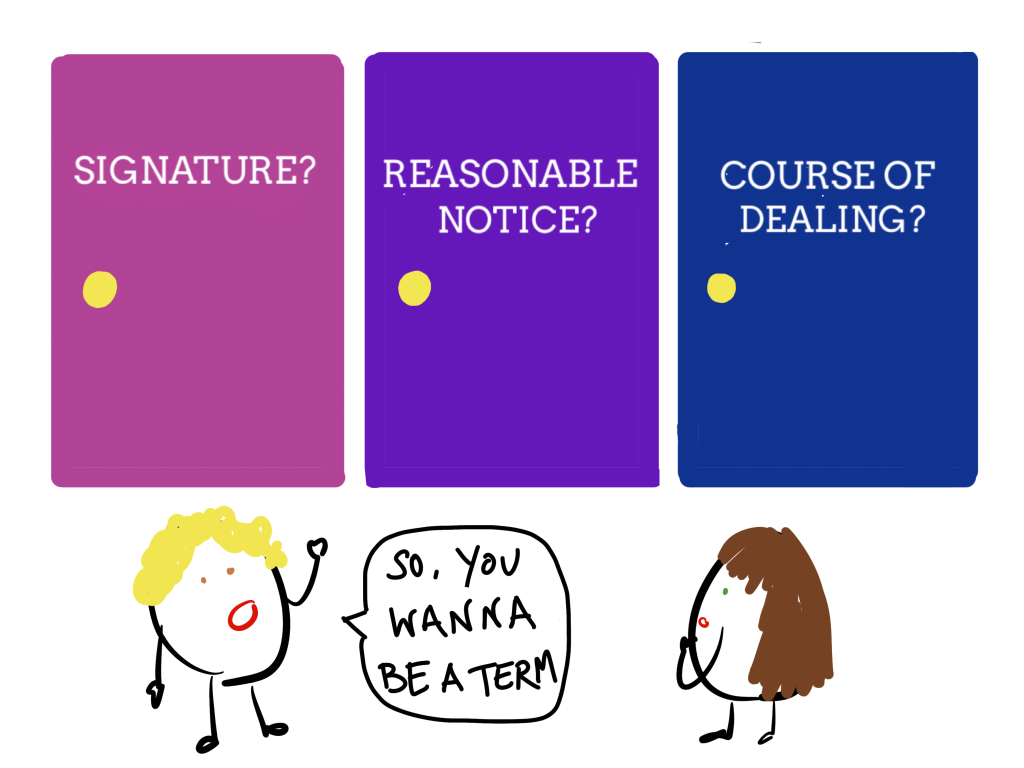 If a party has signed a document then the terms included in it will be binding on the signatory even if they have not read the document (L’Estrange v Graucob (1934) (HC)). 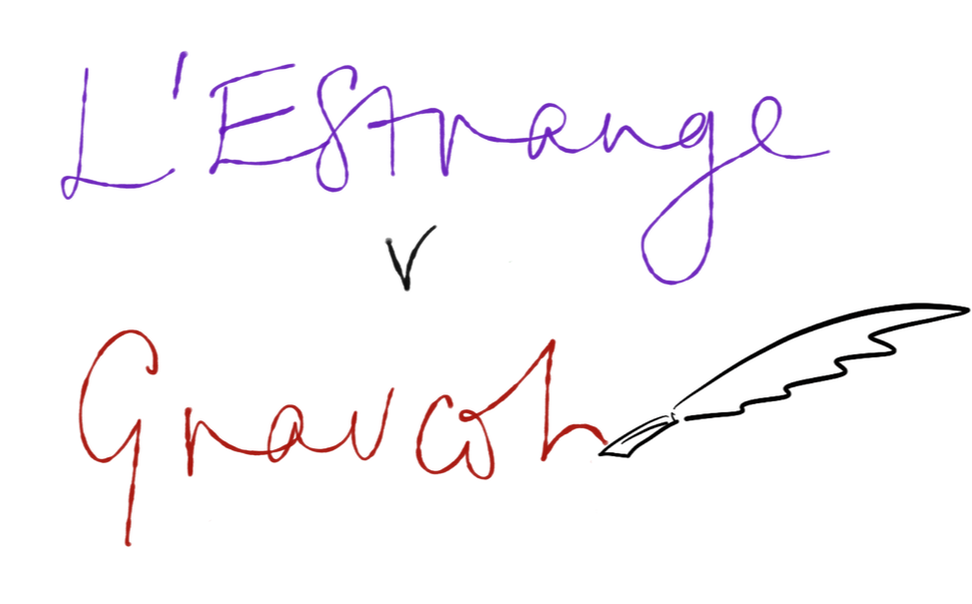 L’Estrange had bought a cigarette vending machine from Graucob and signed a document without reading it that included an exemption clause. When the machine broke down the court found that she was unable to sue Graucob because the exemption clause has been incorporated in the signed document.

LIMITATIONS TO THE RULE

Terms not in a signed document can be incorporated through reasonable notice. The party relying on the term must take reasonable steps to ensure that the other party has notice of that term. This is an objective test based on what the reasonable man would have noticed.

Reasonable notice, the timing of the notice and the document on which the statement is written are all considered by the court when deciding if a term has been incorporated. As you will see from the cases below each case rests on its own facts. 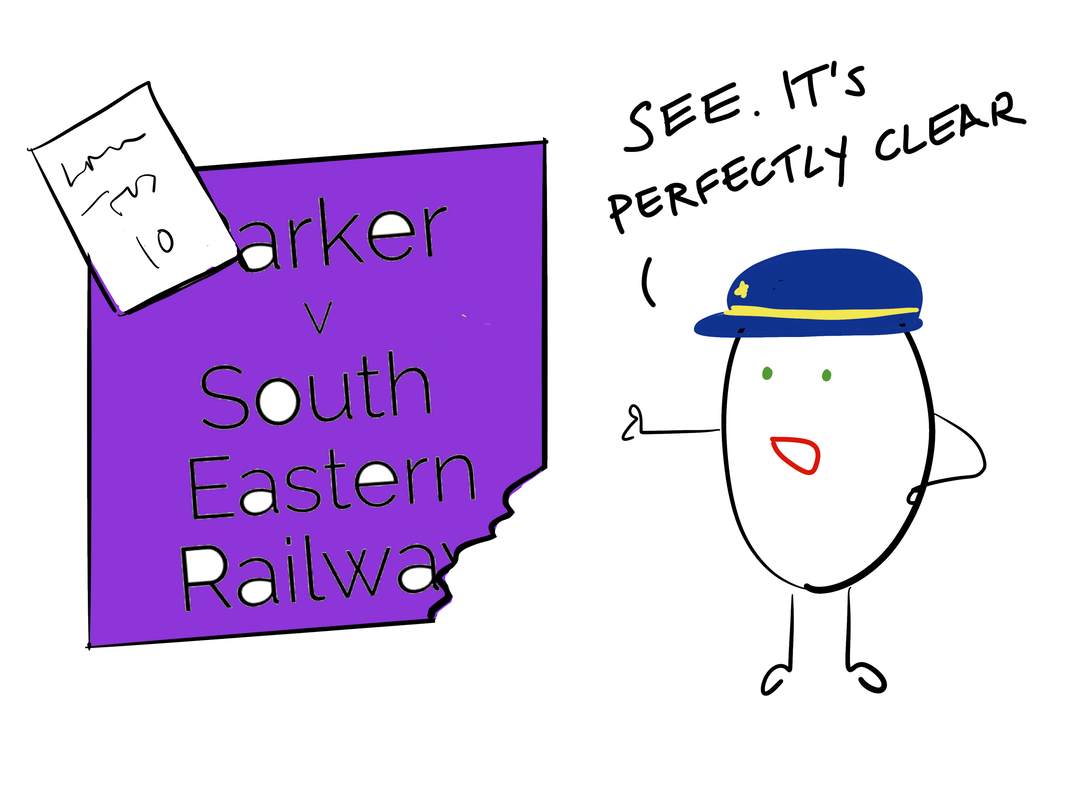 In Parker v South Eastern Railway (1877) (CoA) Parker left a bag in a left luggage cloakroom at the railway station. He was issued with a ticket on which was printed ‘See Back’. On the back was a term excluding liability for loss. When Parker’s bag was lost he brought a claim against the railway. The court found that the railway had taken reasonable steps to bring the term to Parker’s notice. He had been directed to the notice by reference (the wording on the front of the ticket) and a ticket is an acceptable form of contractual document on which terms are often found. The reasonable man would have turned the ticket over and read the exemption clause.

This case also highlights that a term can be incorporated via reference to another document, or the back of a document. This will only count as reasonable notice if the person can reasonably access the information referred to.

There are several other cases that illustrate the concept of reasonable notice;

The term must be included in a valid contractual document. This will depend on whether the party could reasonably have expected the document to contain contractual terms (Chapelton v Barry Urban District Council (1940) (CoA)).

Chapelton hired a deck chair from the Council. The piece of paper that he was given after collecting the deck chair included a clause exempting liability for injury. Chapelton did not read the piece of paper believing it to be a receipt and not a ticket. The court found that the reasonable man would have made the same assumption and the term had not been incorporated. In addition the court found that the pile of deckchairs was a unilateral offer which Chapelton accepted when he took one so the ticket he was given afterwards was too late to be incorporated.

Whether the document has contractual force may rely on the facts of the case. Compare Grogan v Robin Meredith Plant Hire (1996) (CoA) in which it was stated that time sheets and invoices are not usually deemed to be contractual documents and Photolibrary Group v Burda Senator Verlag (2008) (HC) in which a parcel of photo transparencies with a delivery note (a kind of invoice) which included terms was an offer which was accepted by the other party’s acceptance of the package.

TIMING OF THE STATEMENT

Reasonable notice of a term must be given before the contract is concluded (Olley v Marlborough Court Hotel (1949) (CoA)). 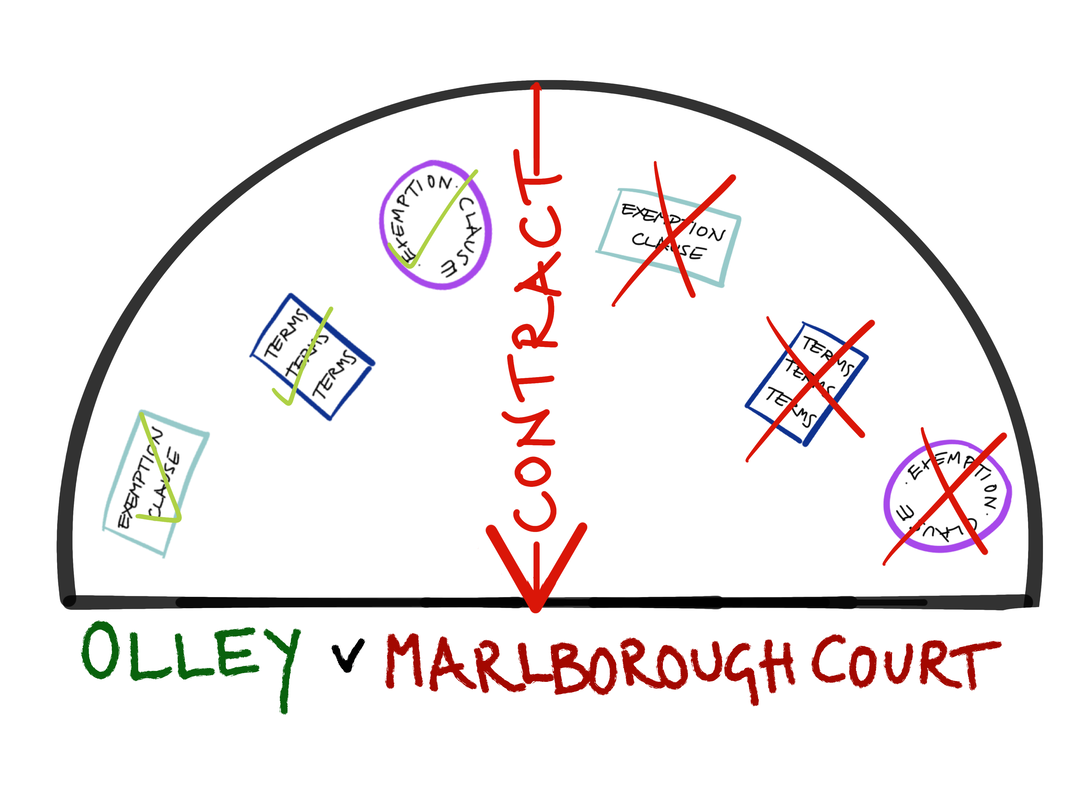 A notice in a hotel bedroom excluding liability could not be a term of the contract because the contract had been concluded at the check-in desk before the guests went to their room and were able to see the notice.

In Thornton v Shoe Lane Parking (1971) (CoA) before going through the automatic entrance barrier of the car park a ticket was issued to the driver by a machine. The back of the ticket stated that it was issued subject to terms that could be found on signs inside the car park, one of these was an exemption for personal injury. The court decided that the defendant was unable to rely on the exemption clause because no notice of it had been given before the contract was made. The ticket machine was making a standing offer which was accepted when the machine was activated. Therefore the ticket came too late to be incorporated.

This is different from tickets issued by a person which do constitute an offer (see Parker v South Eastern Railway (1877) (CoA) above) because the person being issued the ticket could theoretically read the terms on the back of the ticket and then decide to reject the offer. This is not possible with a machine.

If a term is particularly onerous or unusual then the party relying on it must take extra steps to bring it to the attention of the other party.

‘I quite agree that the more unreasonable a clause is, the greater the notice which must be given of it. Some clauses which I have seen would need to be printed in red ink on the face of the document with a red hand pointing to it before the notice could be held to be sufficient.’ Spurling v Bradshaw (1956), Denning LJ 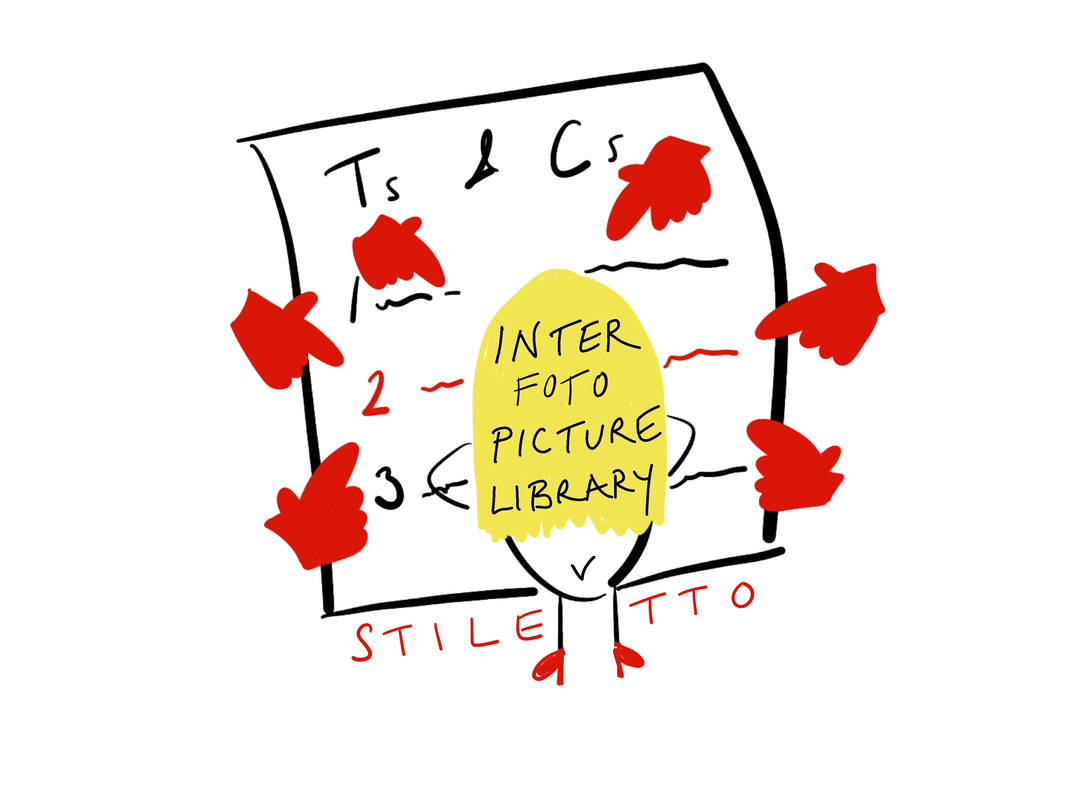 A term setting out the fines for late return of photo transparencies was included in Interfoto’s standard Ts&Cs. Stiletto forgot to return the transparencies for six weeks and was fined a large amount. The court decided that the term was onerous because the fine was much higher than the industry standard. For this reason, and because the two parties had never contracted before, the term should have been more prominent than simply incorporated into the standard Ts&Cs. Therefore, it was not incorporated.

The case of Photolibrary Group v Burda Senator Verlag (2008) (HC), mentioned above, rested on similar facts to Interfoto but the term concerning fines was not considered onerous or unusual because the parties had contracted many times before on the same terms and the level of fines was not unusual for the industry.

As with any implied term an exemption clause can be incorporated based on a regular and consistent course of dealing(McCutcheon v David MacBrayne (1964) (HoL)). 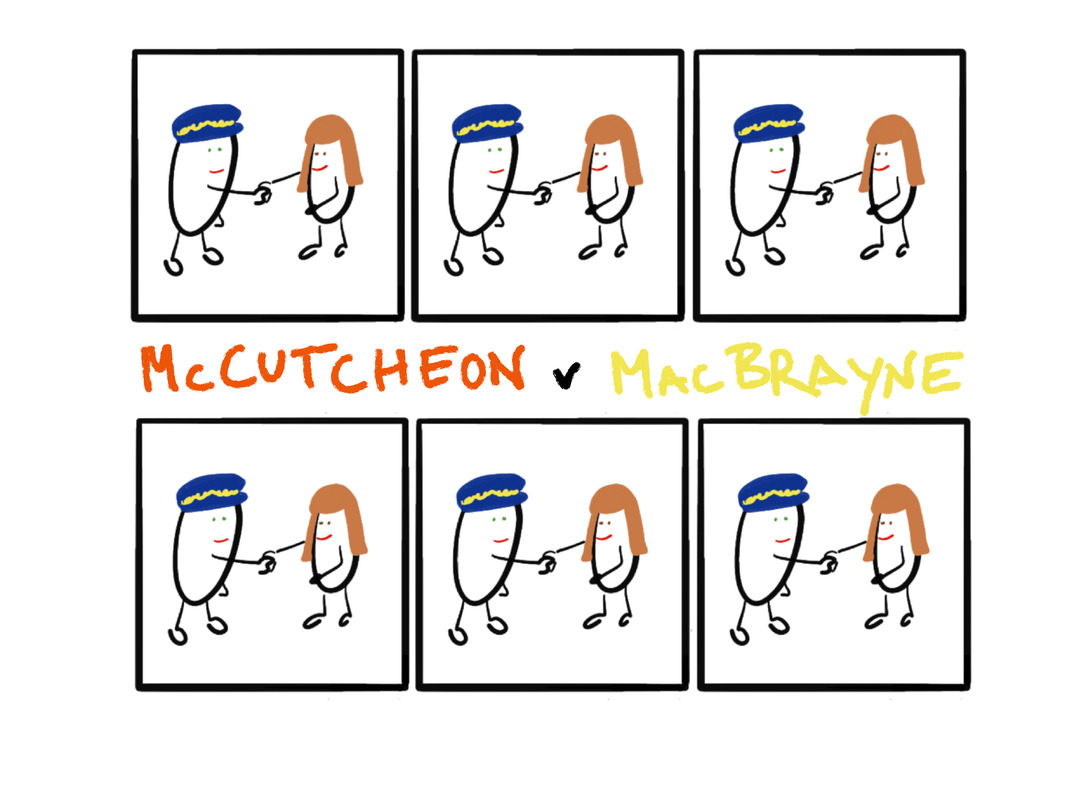 McCutcheon had used MacBrayne’s ferry service on a number of occasions but only on some of those journeys had he had been asked to sign a slip that included an exclusion clause. On one trip, for which no slip had been signed, the ferry sank. MacBrayne were unable to rely on the exclusion clause because the signing of the slip had not previously been consistent enough to constitute a previous course of dealing.

See J Spurling v Bradshaw (1956) (CoA) in which an exemption clause contained in a document could not be incorporated through reasonable notice because it had only been seen by Bradshaw after the contract was concluded. However, the court held that it could be incorporated through a course of dealing because every other transaction between the two parties had included this exemption clause.

The courts are much more likely to imply a term into a B2B contract rather than a B2C contract (Hollier v Rambler Motors (1972) (CoA)).

CONSTRUCTION OF THE EXEMPTION CLAUSE

If an exemption clause has been successfully incorporated into a contract the courts must then decide whether the clause actually covers the loss concerned.

In order to limit the effect of an exemption clause the courts will not extend the exemption beyond the exact wording of the clause (Andrews Brothers v Singer (1934) (CoA)). 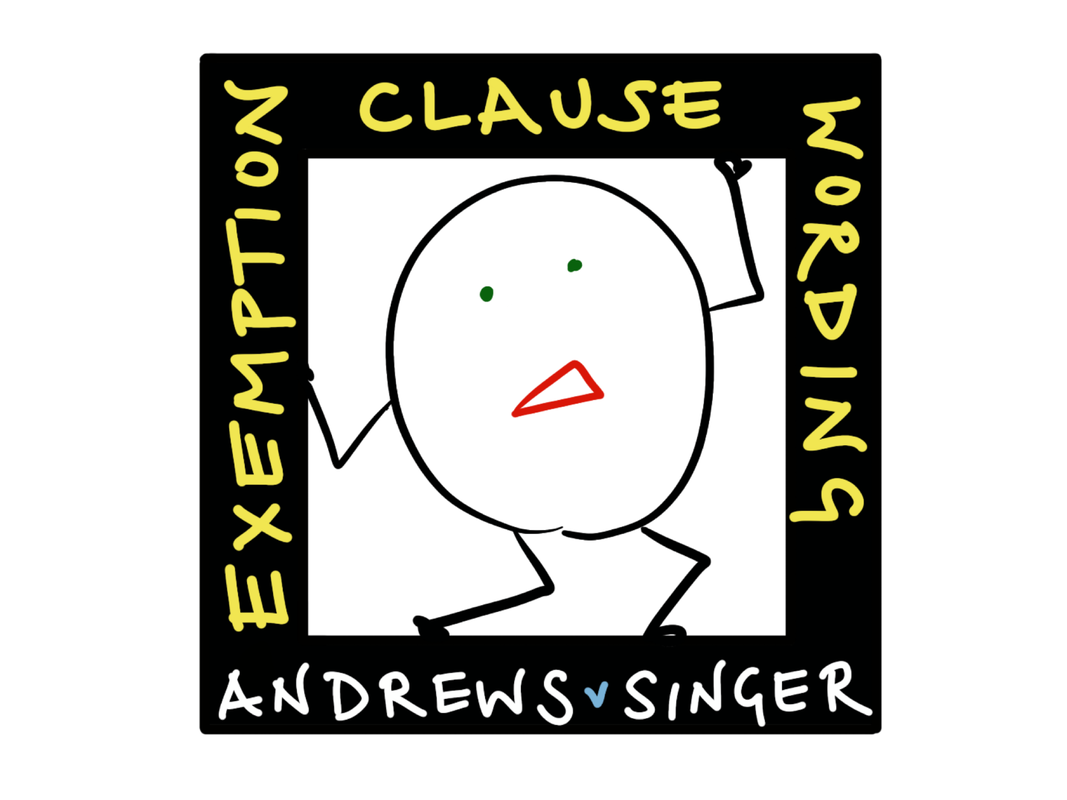 Andrews contracted with Singer to buy a batch of new cars. The contract had an exemption clause covering ‘all conditions, warranties and liabilities implied by common law, statute or otherwise’. When one of the cars arrived with significant mileage on the clock Andrews argued that it was not ‘new’. Singer could not rely on the exemption clause in this situation because the newness of the cars was an express term and the clause only excluded implied terms.

If the meaning of an exemption clause is ambiguous it will be construed contra preferentum, i.e. against the party relying on the clause (the proferens) and in favour of the party subject to the clause (Houghton v Trafalgar Insurance (1954) (CoA)). 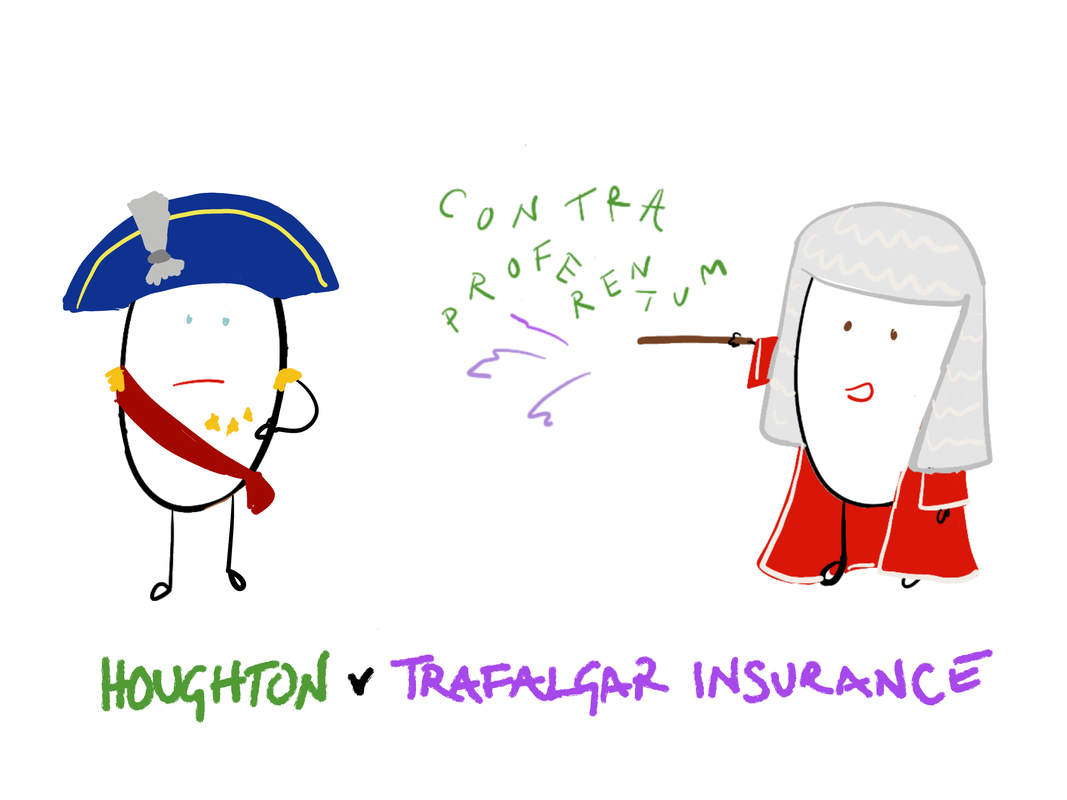 Houghton’s car was insured with Trafalgar Insurance. The insurance did not cover the car if it was carrying ‘any load in excess of that for which it was constructed’. The car was damaged when carrying 6 people. The insurers claimed that as the car was designed for 5 passengers the exemption clause applied and the insurance was invalid. The court, applying the contra preferentum rule, construed the ambiguous clause against Trafalgar Insurance, the party relying on it. They defined ‘load in excess’ as a maximum weight rather than number of people, under which interpretation the car was insured.

If a clause merely limits rather than excludes liability the courts will follow the contra preferentum rule less strictly (Ailsa Craig Fishing Co v Malvern Fishing Co (1983) (HoL)). In addition, the contra preferentum rule is now given a very limited rule in commercial contracts in which the two parties are of equal bargaining power (Persimmon Homes v Ove Arup (2017) (CoA)). 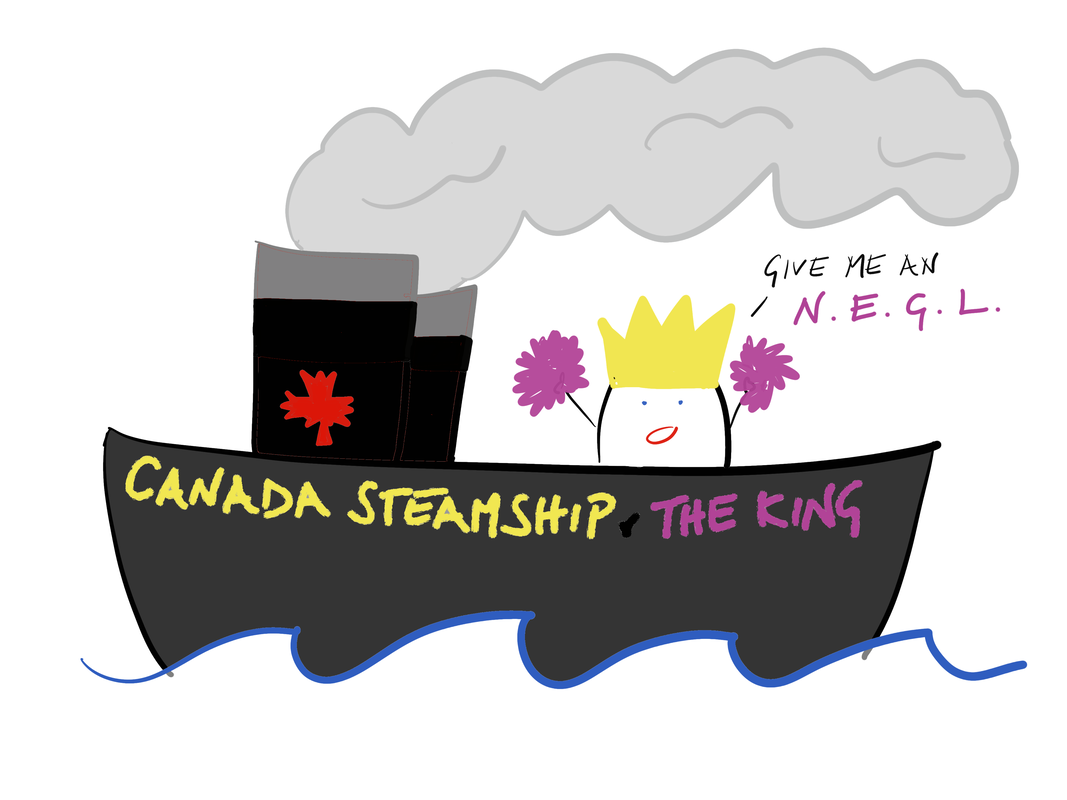 These are now used by the courts as guidelines rather than strict rules and should not be applied in a way that goes against the obvious commercial purpose of the contract.