DISCHARGE BY PERFORMANCE OR ACCEPTANCE

DISCHARGE BY PERFORMANCE OR ACCEPTANCE

Once a contract has been discharged it releases the parties from any further obligation. A contract can be discharged (terminated/brought to an end) in the following ways; 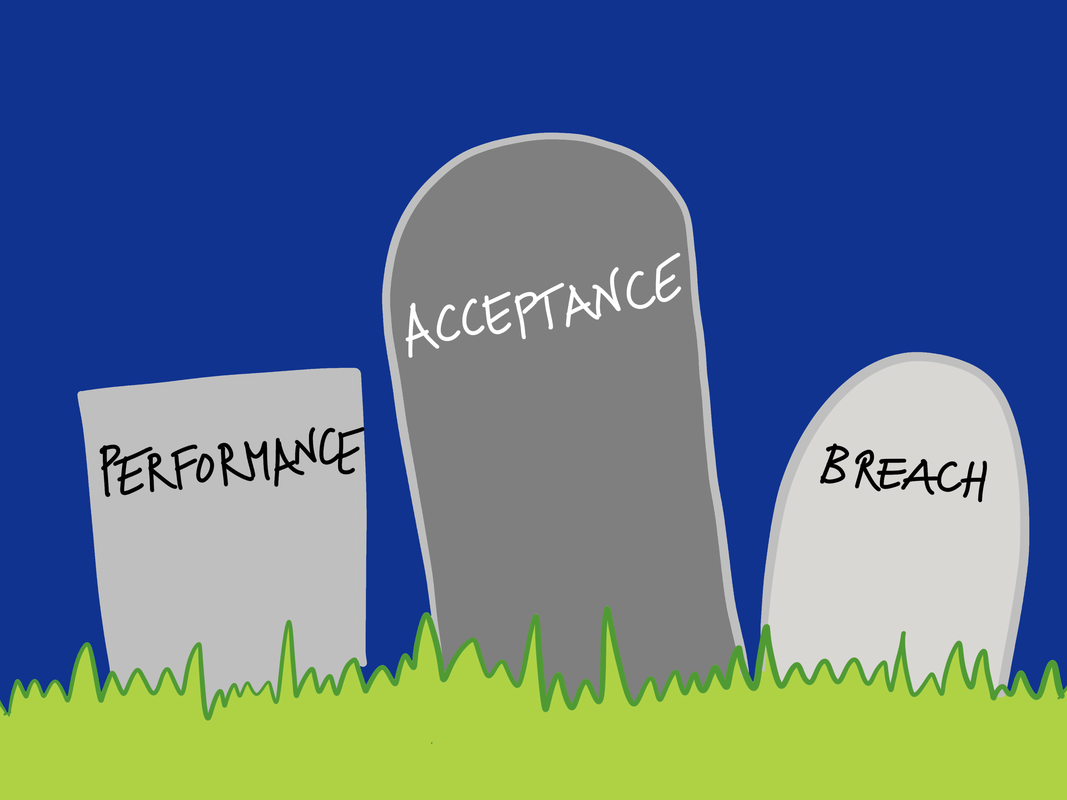 *A contract can also be discharged via Frustration but this is dealt with on the next page.

In order for a contract to be discharged by performance the entire contractual obligation must have been carried out. This is also known as the doctrine of condition precedent because full completion of one party’s promise must be completed before performance of the other party’s promise. This rule is illustrated well by the case of Cutter v Powell (1796) (Court of King’s Bench). 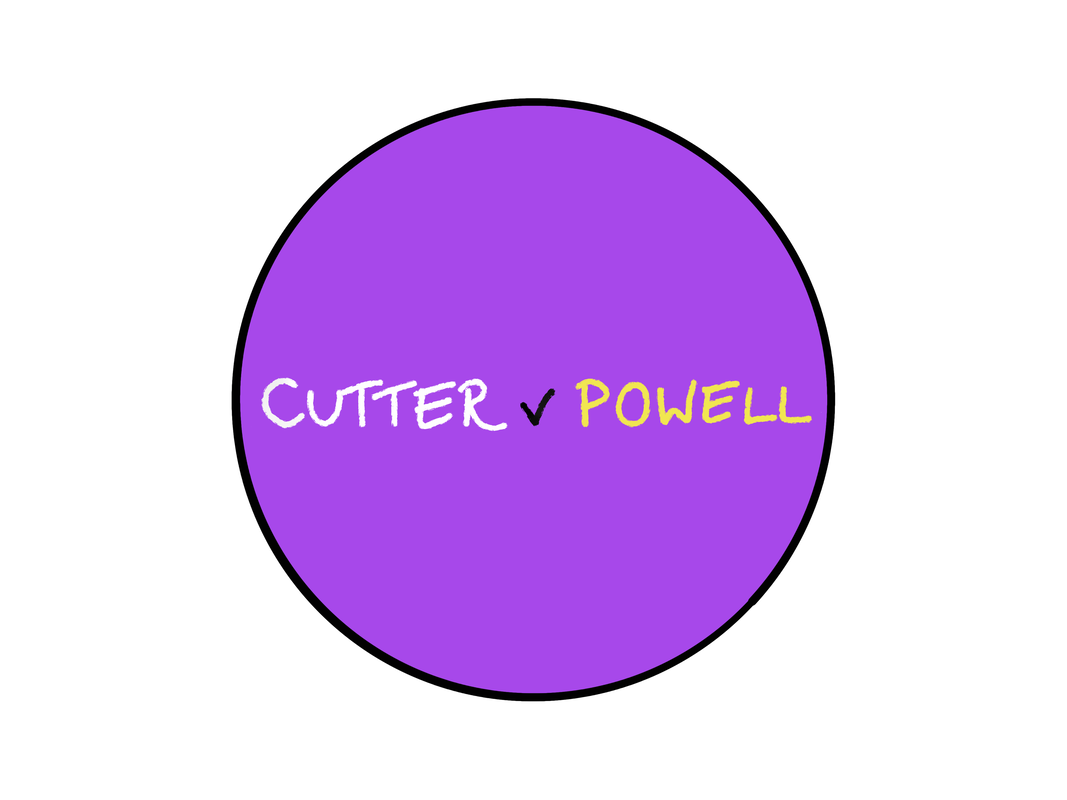 Cutter was employed by Powell to work on a ship sailing from Jamaica to Liverpool for which he would be paid a lump sum upon arrival. Unfortunately, Cutter died before reaching home and his wife was unable to claim his wages for the part of the contract he had fulfilled before he died because it was expressly stated in the contract that payment was conditional upon completion of the voyage. Therefore, Mrs Cutter was not entitled to claim any of her husband’s wages because the contract had only been partially performed.

Because this rule can lead to harsh results there are ways it can be avoided by the courts.

If the full contractual obligations cannot be performed then the promisee can accept partial performance but this must be voluntarily. In this case a sum is payable for the work completed on the basis of quantum meruit (‘the amount he deserves’) (Sumpter v Hedges (1898) (CoA)).

Sumpter contracted to build two houses and stables for Hedges but abandoned the work before completion. Hedges finished the work himself with materials that Sumpter had left on site. The court held that Sumpter was not entitled to payment for the work he had done as Hedges had not accepted the partial performance and could not return the half-finished buildings. However, Sumpter was able to reclaim the cost of the materials that Hedges had used as they could have been returned and Hedges had made a choice to keep them.

Quantum meruit is a type of remedy which compensates the claimant for a contractual benefit that they have given but for which they have received nothing in return. It is used by the courts to provide the claimant with reasonable remuneration based on the objective market value of the product or service. Quantum meruit can be used by the courts when there is no contract or when the contract provisions for remuneration cannot be applied.

If substantial performance of the contract has been carried out but there are minor variations to the agreed terms then payment for the entire contract will generally be due. If the court decides that the variations or defects are sufficiently minor then payment will be due minus a proportionate deduction (Hoenig v Isaacs (1952) (CoA)). 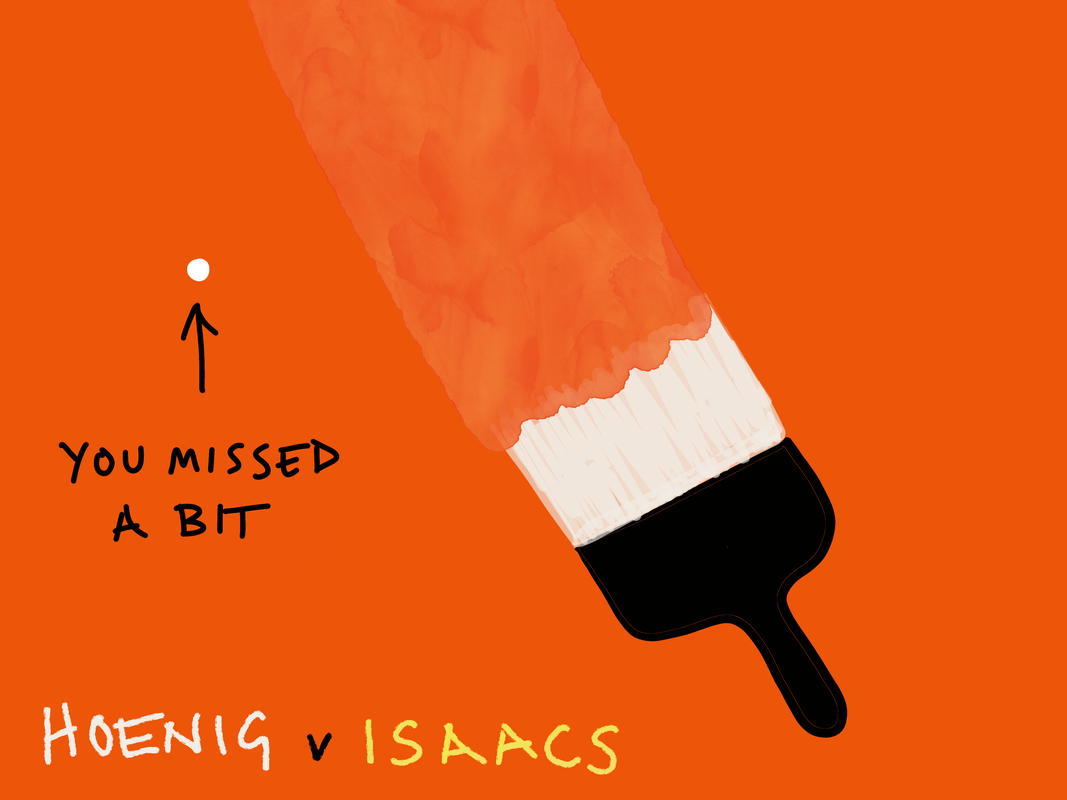 Isaacs hired Hoenig to decorate and furnish his house. Payment was to be made in two instalments with the final one payable upon completion of the work. However, when the work was done Isaacs was dissatisfied with the work and refused to pay the final instalment. Hoenig sued Isaacs for the payment and the court held that as the contract had been substantially performed and the cost of remedying the defects was only £56 Isaacs was not able to withhold payment based on the full contract not having been performed and he must pay Hoenig the final instalment but minus the remedial cost.

WHAT AMOUNTS TO SUBSTANTIAL PERFORMANCE?

The judges in Hoenig v Isaacs interpreted the term ‘substantial’ in its ordinary (literal) meaning and suggested that for performance to be substantial it does not necessarily have to be complete or to the exact satisfaction of the promisee. This was also discussed in Bolton v Mahadeva (1952) (CoA). Bolton was hired to instal a central heating system. Full installation was completed but the system was defective and Bolton refused to fix it. Even though the system had been fully installed the court held that the defects were serious enough to amount to non-substantial performance of the contract, i.e. to instal a system that worked and heated the house, and Mahadeva did not have to pay for the work.

Some contracts are obviously intended to be divisible into parts and a breach related to one part will not equal breach of the entire contract (Ritchie v Atkinson (1808) (Court of King’s Bench)). 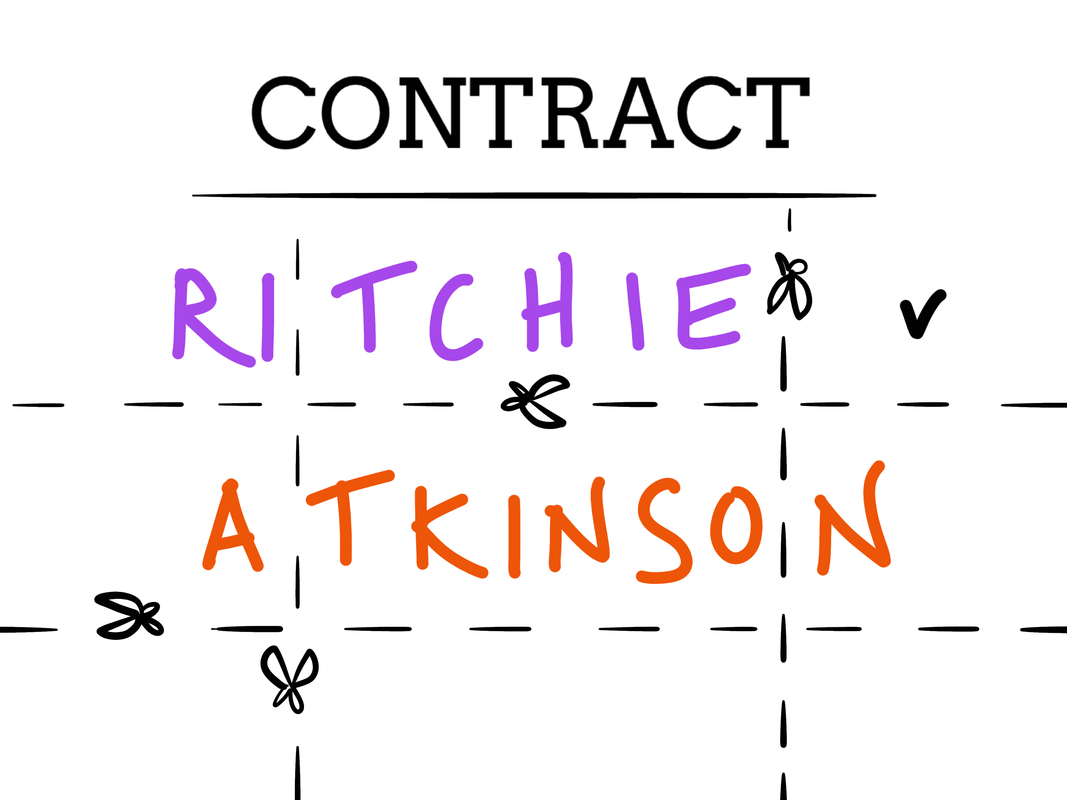 Ritchie agreed to carry a cargo of a specified quantity of hemp and iron. The price agreed was £5 per ton for the hemp and 5 shillings per ton of iron. However, Ritchie only carried part of the agreed quantity. Atkinson argued the contract had not been fully performed and therefore no payment was due. The court held that the contract could be divided into separate parts as the parties had agreed a price per ton. The claimant was thus entitled to payment for the amount carried although the defendant was entitled to damages for non performance in relation to the amount not carried.

A contract can also be discharged (terminated) by agreement of the parties. 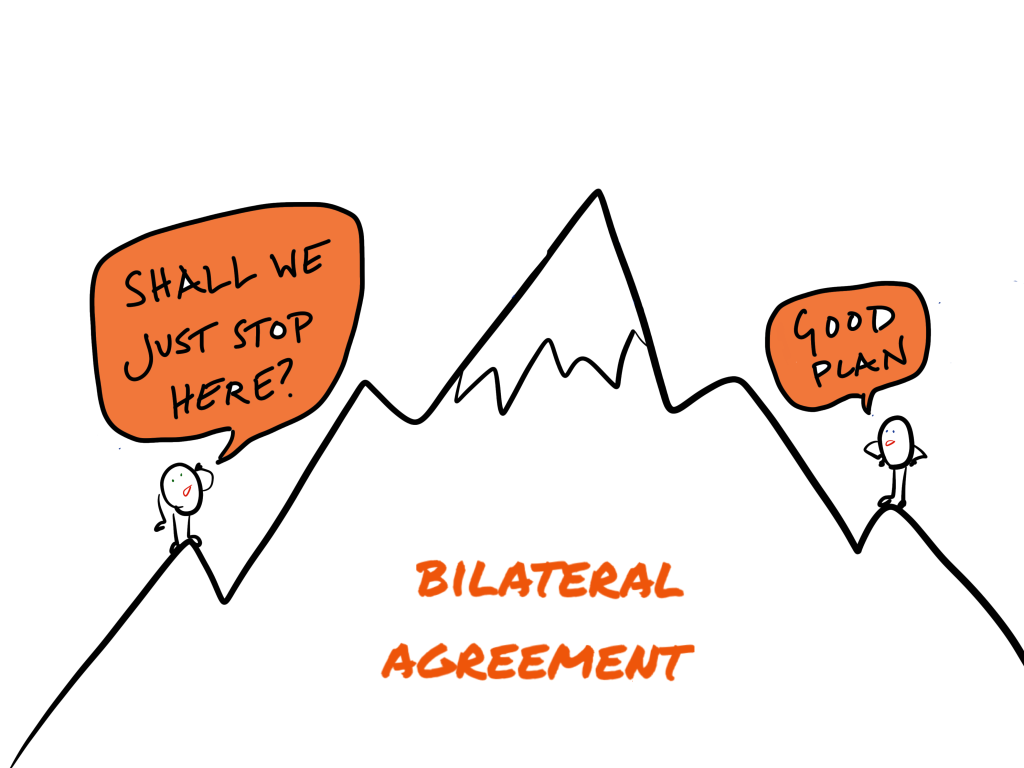 Whilst parties can discharge performance without any formalities, to ensure compliance, it is best practice to have a legally binding (written) agreement. However, a new agreement or second contract to discharge the first requires consideration. If both parties have unperformed contractual obligations the giving up of the right to receive the other’s performance is sufficient consideration for ending the contract.

Alternatively the parties may choose to vary, waive or substitute the performance obligations set under the original agreement as opposed to discharging the agreement altogether. 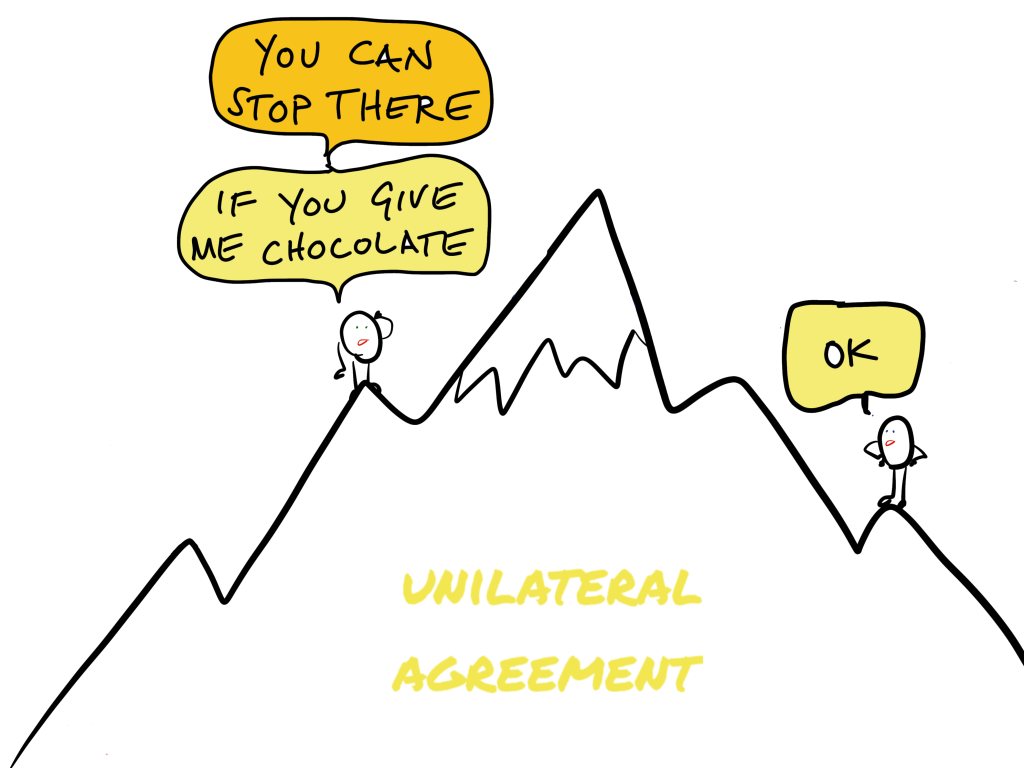 This is whereby one party has completed its performance obligations and agrees to release the other party from its outstanding obligations under the contract. However, this type of agreement is only binding if supported by consideration.