HOME  /  CONTRACT LAW  /  FORMATION OF A CONTRACT   /  PRIVITY OF CONTRACT 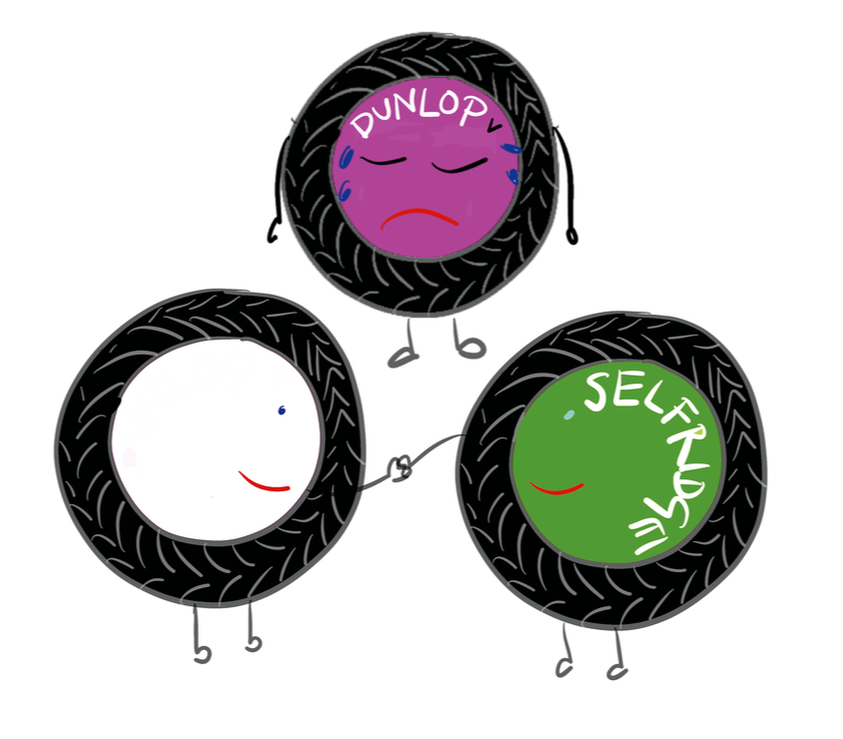 Dunlop sold tyres to Dew & Co. Their agreement stipulated that Dew & Co could not resell them below a certain price. Dew & Co then sold some of the tyres on to Selfridge with the same stipulation. When Selfridge sold the tyres on for a lower price than allowed Dunlop (the third party) sued. The court held that Dunlop could not sue as they were not a party to the agreement between Dew & Co and Selfridge as no consideration had moved from Dunlop to Selfridge (excluding them from being a party to the contract under the consideration rule).

A third party has provided no consideration so they cannot be a party to the contract. This is linked to the rule that consideration must move from the promisee (Tweddle v Atkinson (1861)), excluding third parties from claiming contractual rights.

EXCEPTIONS TO THE RULE

There are a number of problems caused by this principle. Namely it thwarts the intention of A and B when they want their contract to give C a right. Even if a contract heavily implies that parties intend for a third party to have enforceable rights this is ignored by the doctrine. Therefore various exceptions to this rule have arisen.

The Contracts (Rights of Third Parties) Act 1999 creates an exception to this rule.

Section 1(1)(b) and 1(1)(2) seem to cancel each other out but the case below demonstrates how they work in practice. 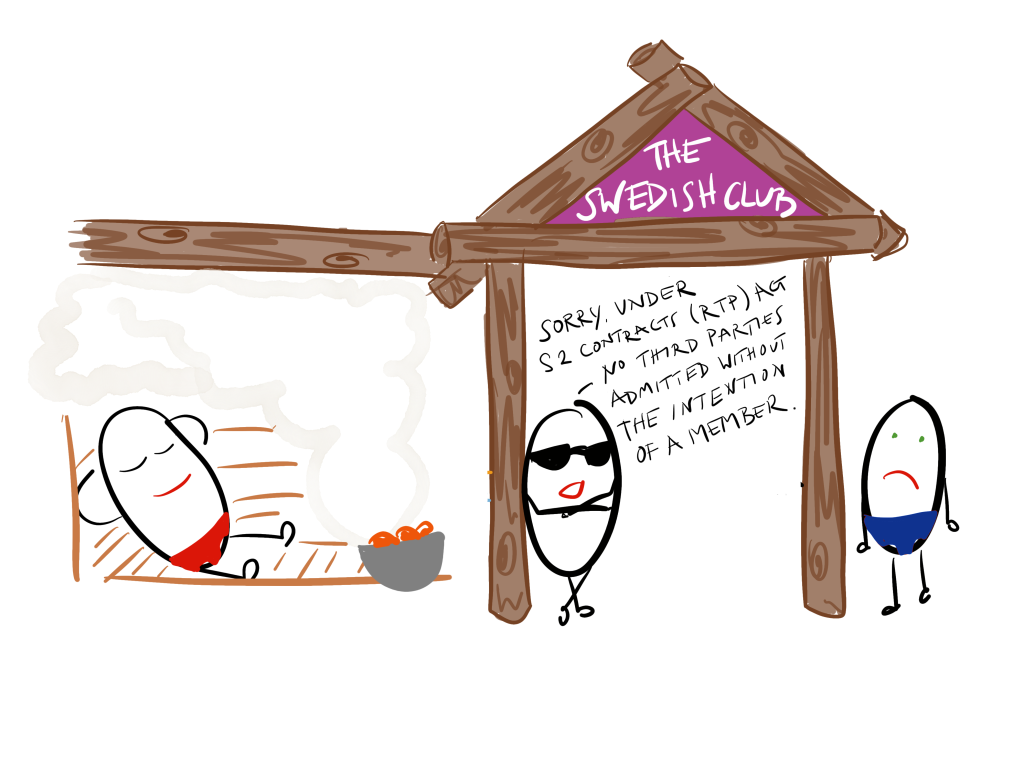 In Dolphin Maritime & Aviation Services Ltd v Sveriges Angfartygs Assurans Forening (The Swedish Club) (2009) (HC) an insurance company hired the claimant to recover money owed to it from the defendant. However, the defendant settled directly with the insurers rather than via the claimant’s demand for repayment. The claimant sued the defendant for loss of commission. The court held that the agreement was between the defendant and the insurers, the claimant was a third party, and as this agreement did not intend to confer any legal benefit upon the claimant (even though in reality they would have gained a benefit, the commission) the statute did not apply and the claimants could not sue.

In addition s.1(3) states that in order for a third party to have an enforceable right they must be expressly identified by name, as a member of a class or as answering a particular description but need not be in existence when the contract is entered into. 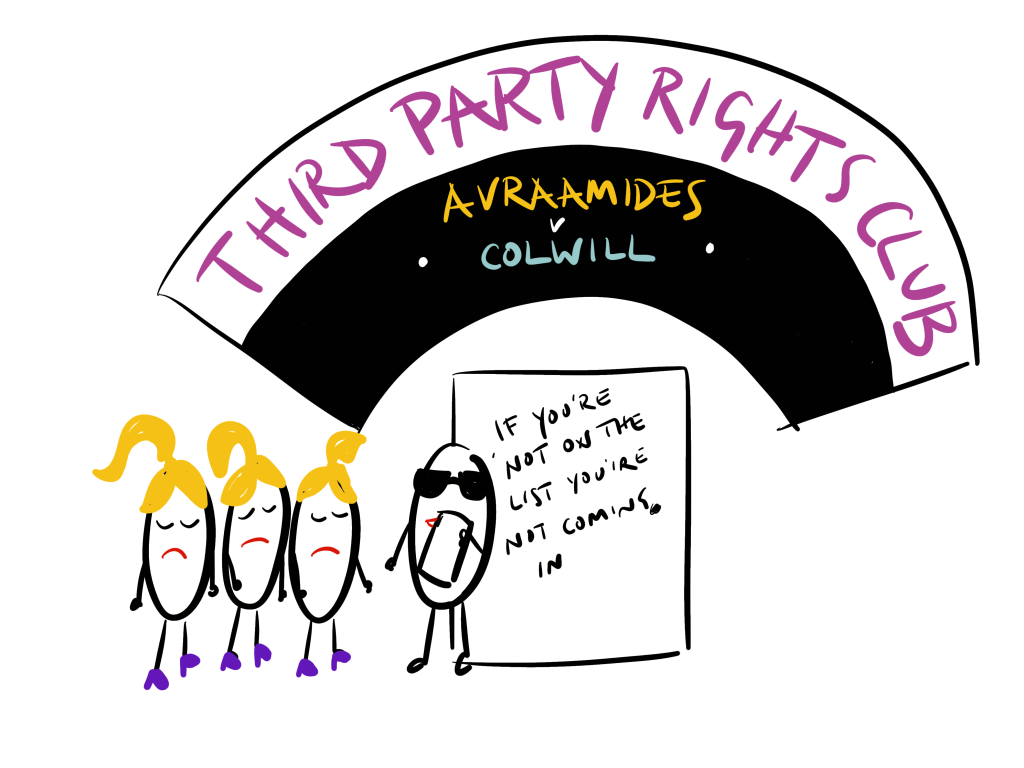 In Avraamides v Colwill (2006) (CoA) Avraamides engaged BTC to refurbish his bathroom. BTC was then sold to Colwill and the contract of sale stipulated that any outstanding work must be completed by BTC. The work done by BTC was inadequate so Avraamides sued Colwill as the new owner. However, because the agreement between BTC and Colwill did not expressly identify Avraamides as a third party he had no right to sue Colwill.

Additionally, s.1(4) states that the entitlement of a third party to enforce a contractual right must comply with all the other terms of the contract. E.g. where there is a limitation clause contained within the contract, assertion of rights by any third party must take place within the specified time frame, otherwise it will not be valid.

Note that this statute does not change the general rule that a third party cannot be held liable for a contract that they’re not a party to.

CONTRACTS ON BEHALF OF A GROUP

If one party has contracted on behalf of a group then they may be able to recover damages for the whole group (Jackson v Horizon Holidays (1975) (CoA)). 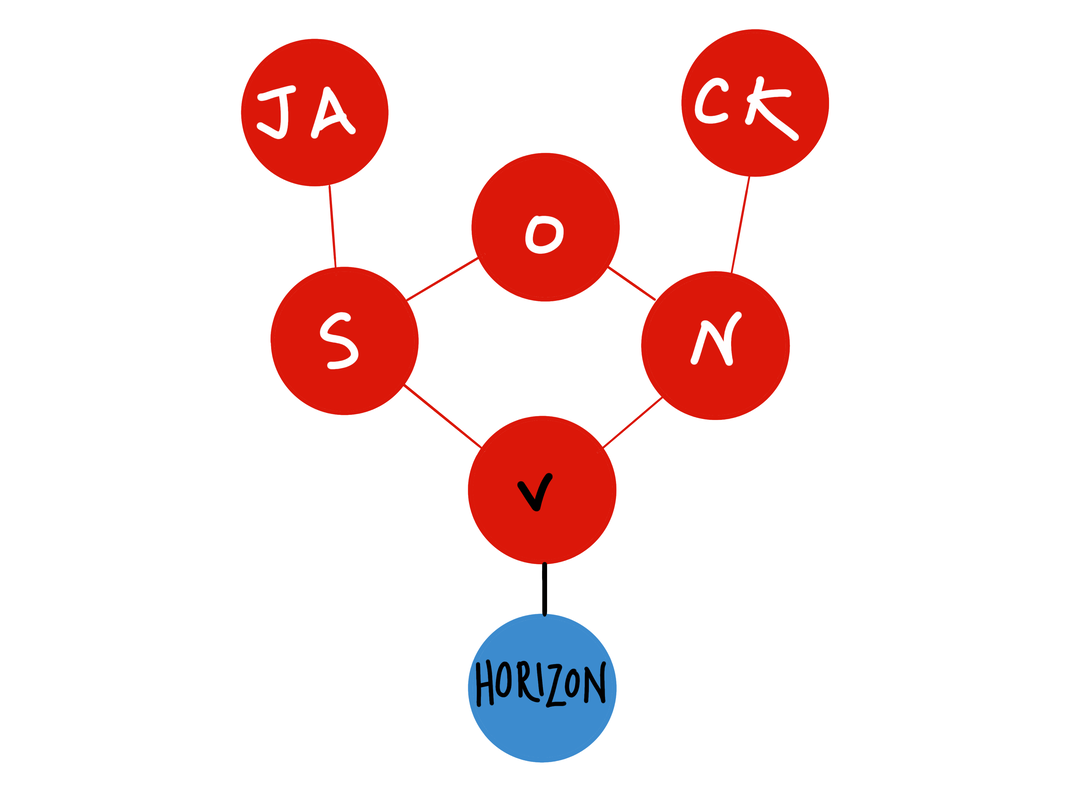 Jackson had booked a holiday for his family. The holiday was terrible, considerably worse than what had been advertised. He sued the holiday company and was awarded almost the whole cost of the holiday. The company appealed on the grounds that Jackson could only recover damages for himself not the other members of the family. The Court of Appeal disagreed; Lord Denning MR argued that Mr Jackson had contracted on behalf of the family and could recover their damages.

This ruling was criticised but not overruled in Woodar v Wimpey (1980) (HoL) and confined to certain types of contract, for example family holidays, restaurant table bookings, hiring a taxi for a group.

CONTRACTS ON BEHALF OF A THIRD PARTY

If parties contract in the knowledge that the end benefit of that contract will be held by a third party then one of the original parties can sue on their behalf. This principle was adapted from the shipping case The Albazero and used in two property cases that were heard together, Linden Gardens Trust v Lenesta Sludge Disposal and St Martin’s Property Corp v Sir Robert McAlpine (1994) (HoL).

A claimant not being able to recover full damages because they were not privy to the original contract was especially prevalent in shipping cases. If damage occurred during transit but after title had been passed to the buyer then they would have no way of bringing a claim in contract against the shipper because the contract for transportation was not made with them but with the seller. An exception to this was first identified in Dunlop v Lambert (1839) (HoL) and rationlised by Lord Diplock in Albacruz v Albazero (The Albazero) (1977) (HoL) (a case concerning crude oil being transferred by ship that sunk).

‘…in a commercial contract concerning goods where it is in the contemplation of the parties that the proprietary interests in the goods may be transferred from one owner to another after the contract has been entered into and before the breach which causes loss or damage to the goods, an original party to the contract, if such be the intention of them both, is to be treated as having entered into the contract for the benefit of all persons who have or may acquire an interest in the goods before they are lost or damaged, and is entitled to recover by way of damages for breach of contract the actual loss sustained by those for whose benefit the contract is entered into.’ Lord Diplock

Lord Diplock called the reasoning in Dunlop v Lambert ‘baffling’ but because it was also a House of Lords’ case the court was unwilling to overrule it thereby cementing the exception to privity for contracts for the carriage of goods in which essentially the carrier also enters into separate contracts of carriage with any party that may become the subsequent owner of the goods. This principle was extended beyond the realm of carriage of goods in the two conjoined property cases. 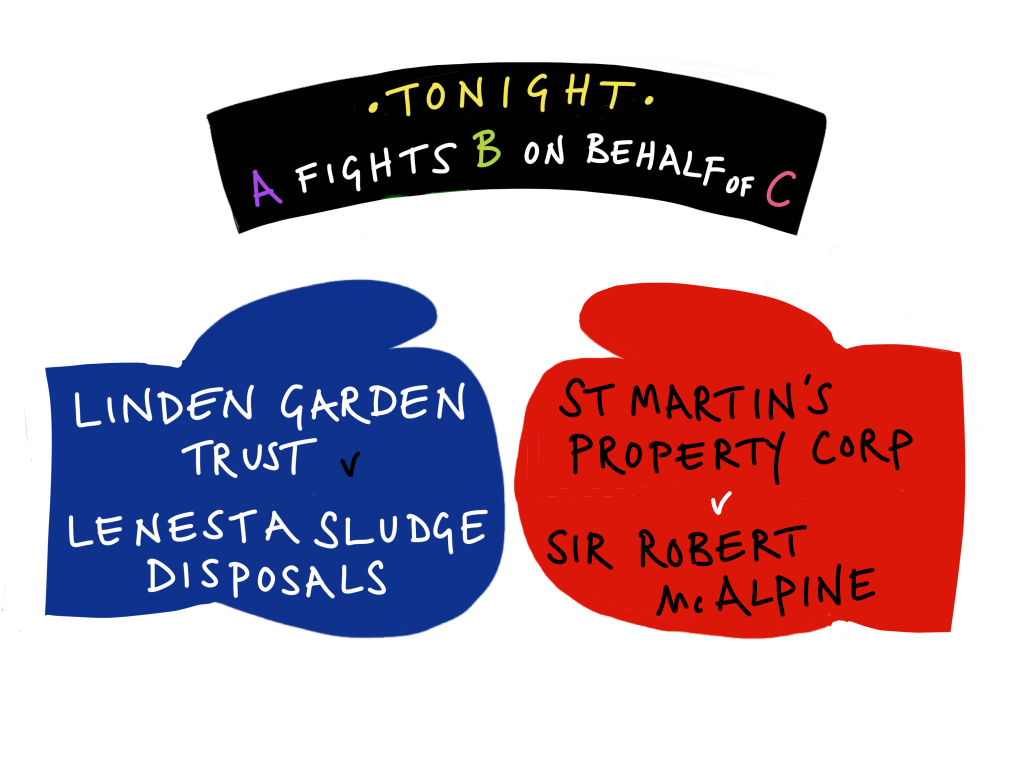 Both cases concerned one party (A) being employed by another (B) to carry out works on a property that they both knew would then be owned by a third party (C). The work done by A was defective but this was only discovered once the property was owned by C. In the Linden Gardens case C brought a case directly against the other party and failed because the original agreement between A and B had excluded assigning any rights to a third party. Whereas in the St Martin’s Property case C was successful because B sued A on C’s behalf, circumventing the exclusion of assignment to C.

This principle was refined in the case of McAlpine v Panatown (2001) (HoL). Third parties that have another legitimate means of recourse against the original party (in this case a separate duty of care deed) are excluded from relying on The Albazero principle. 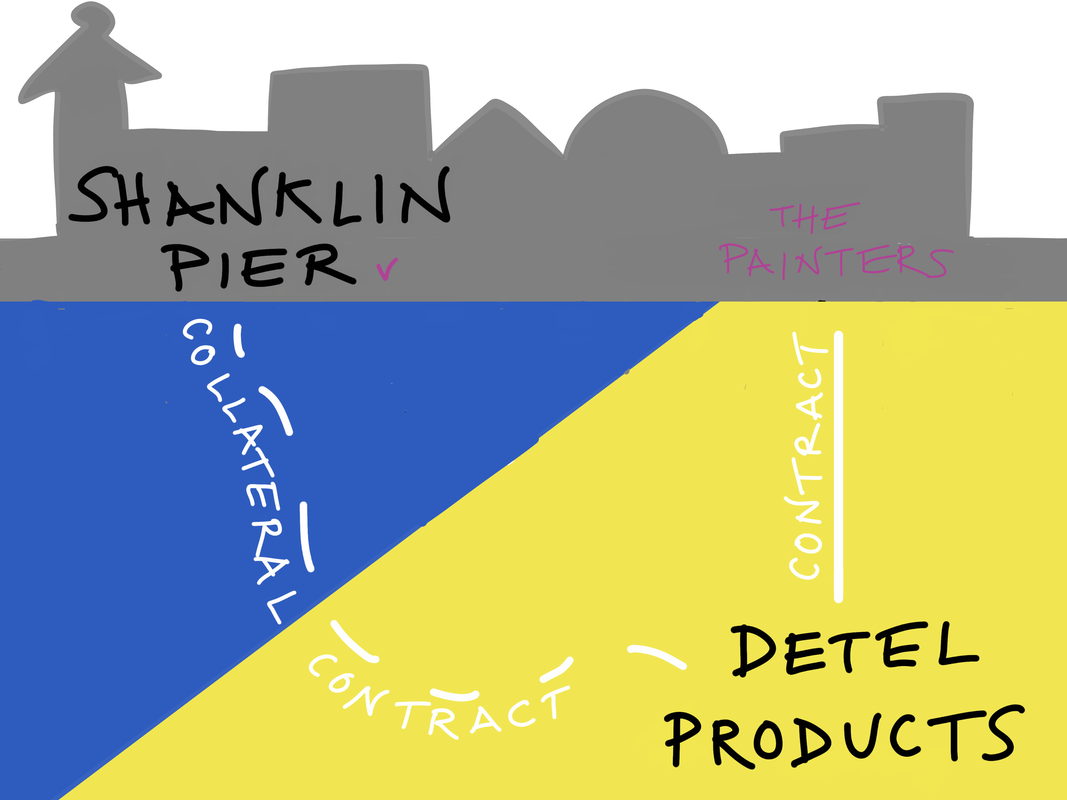 Shanklin Pier had been persuaded by Detel Products to use their paint for refurbishment of the pier. Detel claimed that the paint would last at least 7 years. Shanklin Pier hired a firm to paint the pier and told them to use Detel paint. When the paint started peeling after less than 7 years Shanklin Pier sued Detel Products. They were able to do this even though they were technically a third party to the contract between Detel and the painting firm because a collateral contract existed between them. Detel had promised that the paint would last at least 7 years and in return Shanklin had instructed the painters to use Detel paint, this was considered sufficient consideration.

A third party can recover damages if there is a legally recognised duty of care owed to them (White v Jones (1995) (HoL)). White requested his lawyer Jones to change his will in favour of his two daughters. Jones delayed for so long that White had died before it was changed. White’s daughters sued Jones and won because the court found that he owed them a duty of care.